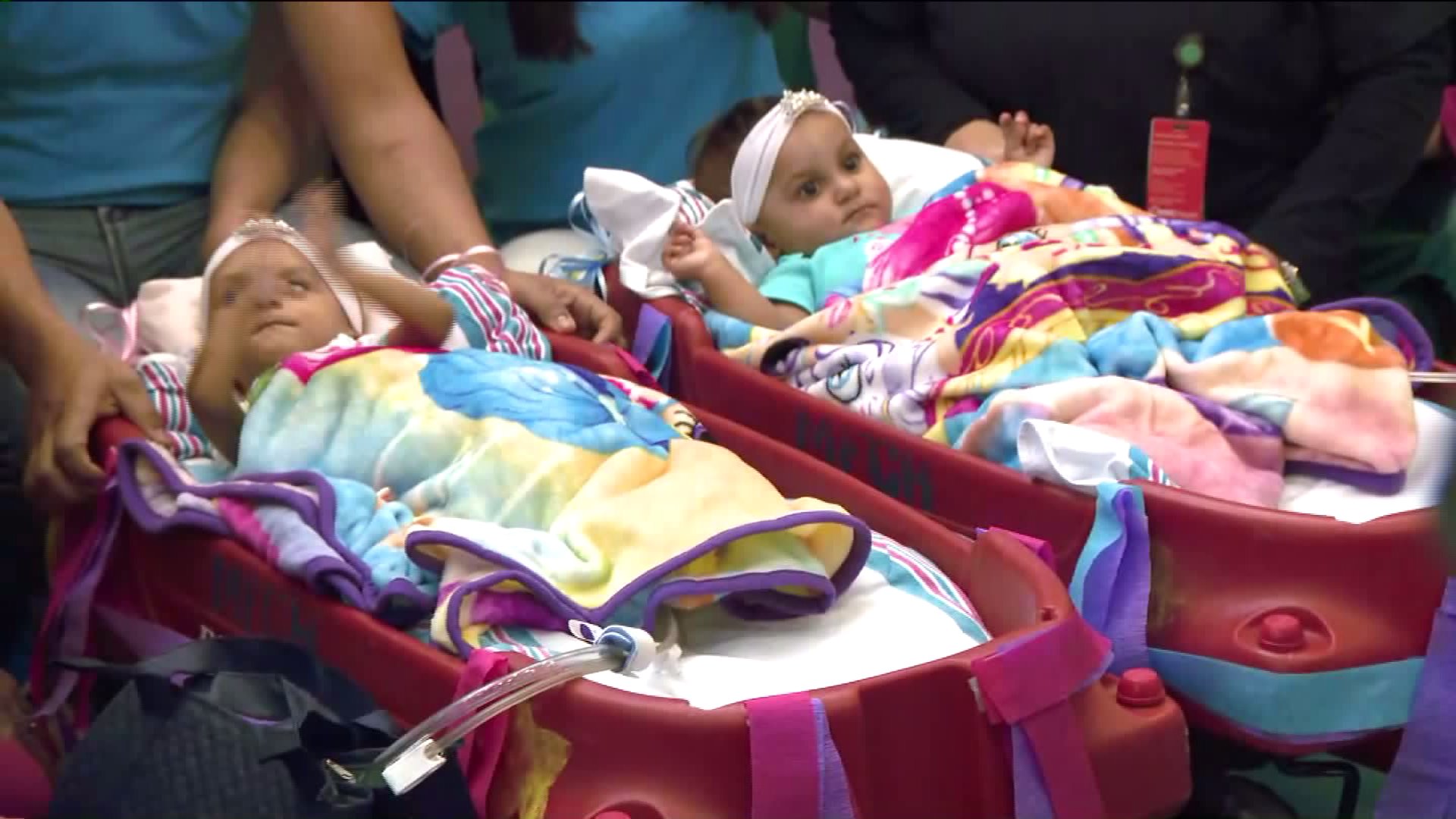 The rare procedure took 21 hours and has been deemed a success.

VALHALLA, N.Y. — Eleven-month-old twin girls conjoined at their lower back have been separated after a first-of-its-kind surgery at Maria Fareri Children's Hospital at Westchester Medical Center.

The rare procedure took 21 hours and has been deemed a success.

Ballenie and Bellanie Camacho, who are from the Dominican Republic, along with their proud parents Laurilin and Abel by their side, the girls made their first public appearance since the life-changing surgery.

The 21-hour procedure took place from January 17-18 and involved more than 50 medical professionals, including a dozen surgeons from five pediatric specialties.

The Camacho girls were joined at the sacrum, or tailbone.

"Overall, we're very, very pleased with how the separation went. The fact that neurologically both girls appear intact, moving forward, there's great hope in terms of how they will be able to enter the world, recover and function for the future," said Dr. Whitney McBride.

Hospital officials attached them to pink and blue to tell them apart. At today's news conference, Ballenie Camacho arrived in the pink wagon. She's smaller at 21 pounds. Her sister Belllenie in the blue wagon, is 32 pounds.

No matter their weight, after all they've overcome — they're known as the Dynamic Duo.

"I think it's a little too early to tell right now but we are happy with how they are moving their extremities and they're feeding well and thriving well right now," said Dr. Samir Pandya.

Earlier procedures, including gastrointestinal and reconstructive surgery, helped prepare the twins for their unique separation surgery.

The Camacho girls were joined at the sacrum, or tailbone. They had gastrointestinal connections and a shared artery, which is a the main supplier of blood to the pelvic region, hips, thighs and reproductive organs. They also shared the spinal cord.

"This is a very rare problem. About 1 in 200,000 babies are in this particular situation. Only about 6 percent to 15 percent of twins that are conjoined have this particular attachment," said Dr. McBride.

Speaking through a translator, parents Laurilin and Abel Camacho, said they were both confident and nervous about the procedure. The couple says their hope is their girls will live a happy and normal life, playing and going to school, like other children.

"Going forward, I think with the degree of skill, not only actual operative care but afterwards with the post-operative care, rehabilitation and intervention, I think the chances of both girls having a really good quality of life are very very high," said Dr. McBride.

Although doctors are extremely optimistic, the girls still face a long road ahead of them. They may have gastrointestinal issues and will likely need therapy to help them with walking and mobility in the future.

The girls are expected to spend several weeks in recovery at Maria Fareri Children's Hospital.

Twin girls conjoined at their lower back prior to their surgery at Maria Fareri Children's Hospital at Westchester Medical Center.