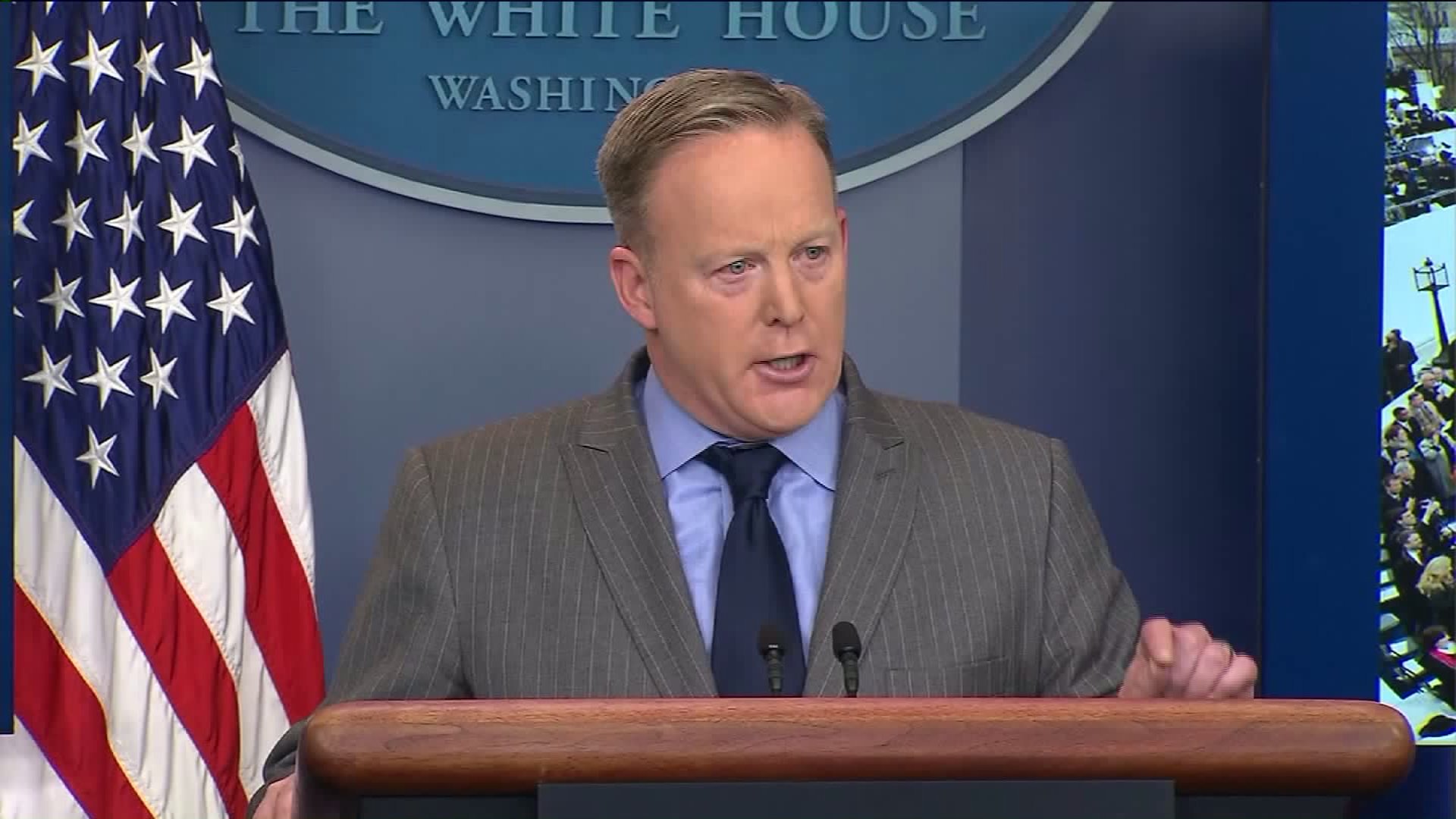 "This was the largest audience to ever witness an inauguration, period," Spicer said, contradicting all available data.

NEW YORK — "That's what you guys should be writing and covering," new White House press secretary Sean Spicer angrily lectured reporters on Saturday during his first remarks from the podium of the press briefing room.

He was referring to the delay in Senate confirmation for President Donald Trump's pick to lead the CIA, Congressman Mike Pompeo, but the comment came after a long digression about how many people had shown up to watch Trump be sworn in as president.

"This was the largest audience to ever witness an inauguration, period," Spicer said, contradicting all available data.

Spicer said, without any evidence, that some photos were "intentionally framed" to downplay Trump's crowd.

He also expressed objections to specific Twitter posts from journalists. And he said, "we're going to hold the press accountable," partly by reaching the public through social networking sites.

Spicer, at times almost yelling while reading a prepared statement, took no questions. CNNMoney called his cell phone a few minutes later; he did not answer.

Some longtime White House correspondents were stunned by the tirade.

"I've run out of adjectives," wrote Chuck Todd, the moderator of NBC's "Meet the Press."

Karen Tumulty of the Washington Post said Spicer's assertion about "what you guys should be writing" was "chilling."

Reactions were overwhelmingly negative, and not just from journalists.

Ari Fleischer, who had the same job as Spicer during the George W. Bush administration, tweeted, "This is called a statement you're told to make by the President. And you know the President is watching."

And Brian Fallon, who was in line to become press secretary if Hillary Clinton had won, wrote, "Sean Spicer lacks the guts or integrity to refuse orders to go out and lie. He is a failure in this job on his first full day."

Conservative commentator Bill Kristol said "it is embarrassing, as an American, to watch this briefing by Sean Spicer from the podium at the White House. Not the RNC. The White House."

The White House alerted the press corps to Spicer's statement more than an hour ahead of time.

The CNN television network made a choice not to broadcast the Spicer statement live. Instead, the statement was monitored and then reported on after the fact.

Former Democratic congressman Steve Israel, who recently joined CNN as a commentator, said, "This isn't a petty attack on the press. It's a calculated attempt to delegitimize any questioning of @realDonaldTrump by a free press."

Spicer's statement came two hours after Trump spoke at CIA headquarters and described his "running war with the media." Trump spent several minutes of that speech complaining about news coverage.