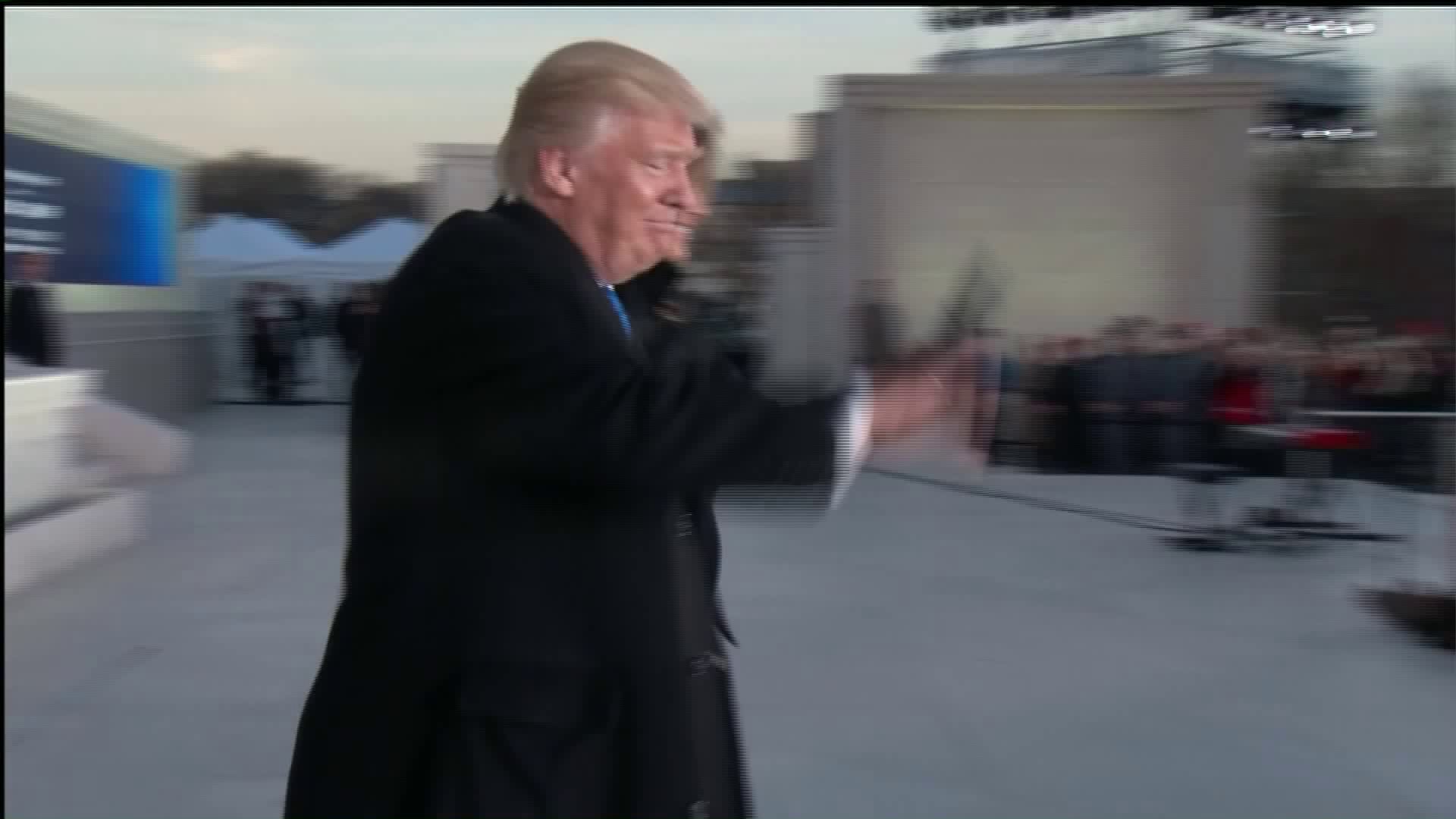 The real estate mogul and reality television star will be sworn in as the 45th president of the United States.

WASHINGTON — Donald Trump will soon be sworn in as the 45th President of the United States during a historic transfer of power that encapsulates American democracy even in politically divisive times.

The traditions of the day began unfolding early Friday morning. Trump and his family attended a private worship service at St. John's Church, known as the church of presidents. The Obamas greeted Trump and soon-to-be First Lady Melania Trump at the North Portico of the White House before hosting them for tea.

Earlier in the morning, Obama wrote a letter to Trump and left it on the Resolute Desk in the Oval Office, as outgoing presidents typically do for their successors. As Obama left the Oval Office for the final time, he was asked if he had any words for the American people. "Thank you," Obama said.

Trump will take the oath of office on the West Front of the Capitol just before noon, swearing to preserve, protect and defend the Constitution. That moment will mark the culmination of a stunning upset victory in last year's bitter presidential election.

Former Presidents George W. Bush and Bill Clinton are attending the ceremonies. Hillary Clinton, who Trump defeated in the November election, is also at the Capitol in a show of support for national unity and the peaceful transfer of presidential authority.

The customs and symbolism that will play out over the course of the day -- from the President-elect's ride to the Capitol with Obama to the First Couple's dance at an inaugural ball -- will be familiar. But the circumstances of this inauguration -- the 58th in the nation's history -- could hardly be more unconventional.

When the presidential primary season began nearly a year ago, few thought Trump could survive the battle for the Republican nomination -- much less beat Clinton to win the presidency. He will be the oldest president sworn in for a first term and the first president with no previous diplomatic, political or military executive experience.

But his populist campaign deeply resonated with Americans who were fed up with Washington's political class and felt left behind in the globalizing economy. Trump offered a preview of his inaugural message during a celebratory concert on the steps of the Lincoln Memorial Thursday evening.

On Friday morning, he heralded his inauguration in typical style -- with an early morning tweet after he waking up in Blair House, the official government residence across Pennsylvania Avenue from the White House.

"It all begins today! I will see you at 11:00 A.M. for the swearing-in. THE MOVEMENT CONTINUES - THE WORK BEGINS!" Trump tweeted.

Trump began a day of ceremony Friday morning by attending the traditional inauguration day worship service. When they arrived at the White House, Melania Trump brought a gift for the Obamas in a blue box wrapped in a bow, which the President handed into an aide before returning for a photo.

The Obamas will soon leave the White House for the last time, accompanying the Trumps to Capitol Hill for the swearing-in ceremony. Trump will take the oath of office, led by Chief Justice John Roberts, on two Bibles, one that he used as a child and the other used by Abraham Lincoln at his first inauguration.

In what is always a poignant moment, the former president and his family will then head to Andrews Air Force base for a farewell ceremony before taking one last flight on the presidential jet. The Obamas are heading to Palm Springs, California, for a vacation.

Trump will attend a joint congressional inaugural luncheon in the Capitol before heading back to the White House for the inaugural parade. In the evening, Trump and the new first lady will attend two inaugural balls, part of the stripped down inaugural festivities that aides say are meant to stress that the new president is eager to get to work.

Trump's supporters, who sent him to Washington to rip up political norms and thwart the establishment, are thrilled as he assumes power. The crowds started streaming towards the National Mall as dawn broke, with many people wearing Trump's distinctive red "Make America Great Again" baseball caps.

But millions of Americans are also anxious, owing to the abrasive tone of Trump's campaign and fears over the consequences of his strongman leadership style.

Trump has vowed to tear up US trade deals that he says disadvantage US workers, confront a rising China and improve estranged relations with Russia, despite allegations that Moscow interfered in the election.

He has set high expectations for his presidency by promising to return jobs to US shores and reviving the manufacturing industry. He has pledged to crush ISIS and introduce tough new vetting on immigrants from countries where there is terrorist activity, raising fears of discrimination against Muslims.

He is promising to build a wall on the southern border, to crack down on undocumented migrants and to gut the financial and environmental regulations that are at the center of the Obama administration's legacy.

The world will be watching Trump's inauguration closely because it will usher in a period of uncertainty and instability as he's shown every sign he plans to be as disruptive to convention on the international stage as at home.

Still, the peaceful transfer of power from Obama to Trump, his longtime political nemesis, represents a moment of unity and stability in a wild political era.

New presidents typically use the inaugural address -- viewed by a huge crowd fanned out on the National Mall and millions of television viewers -- to issue a call for national unity and ease the wounds of divisive elections. They typically remind Americans of the values and the history that binds them and of the nation's historic mission.

Trump, so far, has done little to reach out to his foes since November.

"He is still talking as if he is the insurgent candidate rather than the President-elect," said Robert Rowland, an expert on presidential rhetoric at the University of Kansas. "Historically, presidents who are effective use inaugural addresses to heal the wounds of the campaign, to talk about what it means to be an American, to discuss shared values and lay out their political principles to come across as a strong not vain leader."

He added: "The question with Trump is, if he did those things, would it go against the personality he has established for himself?"

The inauguration represents an important potential reset moment for Trump, who begins his presidency with the worst approval ratings of any modern president.

Aaron Kall, editor of a new book "I Do Solemnly Swear: Presidential Inaugural Addresses of the Last Forty Years," said that it is "imperative" for Trump to build some political running room for himself with his address.

"He needs the support of the public and the speech is a great way to get that," Kall said.

One person familiar with Trump's prep says he has spent "countless hours" practicing his speech and rehearsing it - far more time than he's devoted to other big speeches.

"This is the pinnacle," the person said.

After the most polarizing elections, new presidents often take the chance to pay tribute to their defeated rival. In 2001, Bush thanked his vanquished foe Al Gore for a "contest conducted with spirit and ended with grace." Trump will be closely watched to see if he offers a similar gesture of reconciliation to Clinton.

Incoming White House Press Secretary Sean Spicer told reporters Thursday that Trump's inaugural address, which is expected to last around 20 minutes, would come from the heart.

"It's going to be a very personal and sincere statement about his vision for the country. He will discuss what it means to be an American," Spicer said, adding that Trump would also address the challenges faced by the middle class. "He'll talk about infrastructure and education, our manufacturing base. I think it's going to be less of an agenda and more of a philosophical document. A vision of where he sees the country, the proper role of government, the role of citizens."