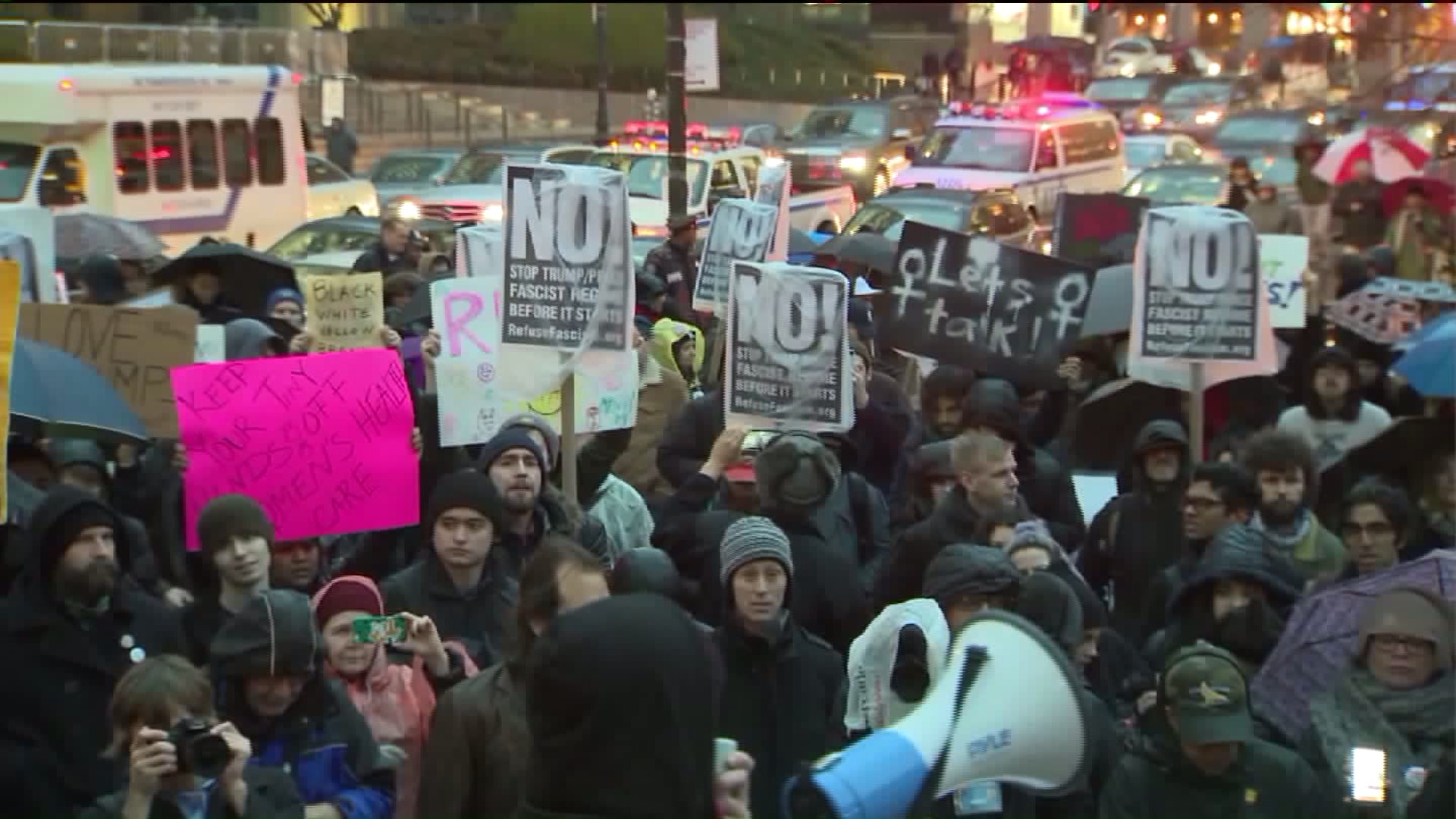 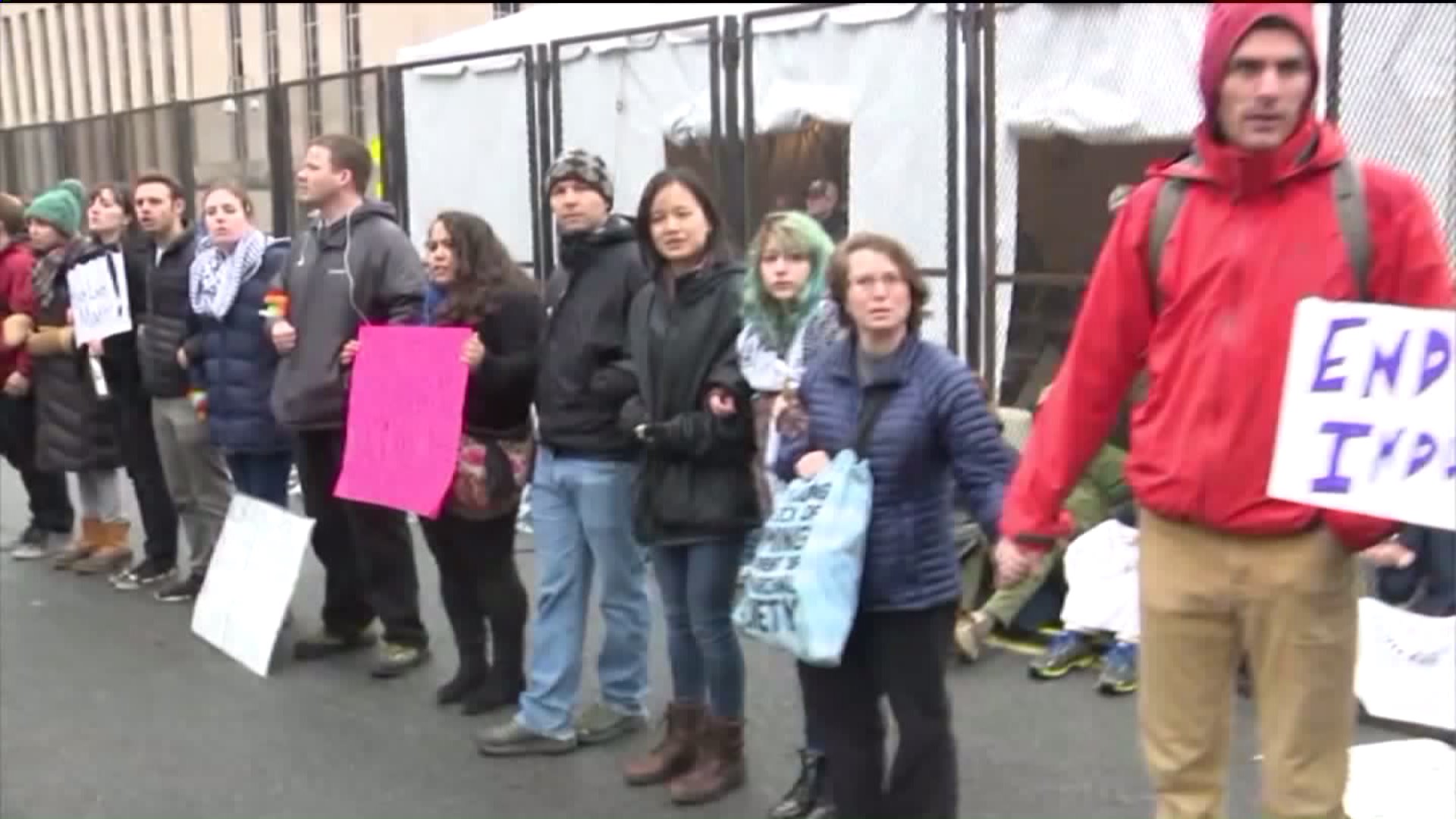 At least two DC police officers and one other person were taken to the hospital after run-ins with protesters, DC Fire Spokesman Vito Maggiolo told CNN. Acting DC Police Chief Peter Newsham said the officers' injuries were considered minor and not life threatening.

Bursts of chaos erupted on 12th and K streets as black-clad "antifascist" protesters smashed storefronts and bus stops, hammered out the windows of a limousine and eventually launched rocks at a phalanx of police lined up in an eastbound crosswalk. Officers responded by launching smoke and flash-bang devices, which could be heard from blocks away, into the street to disperse the crowds.

"Pepper spray and other control devices were used to control the criminal actors and protect persons and property," police said.

Newsham told CNN the several hundred demonstrators who actively confronted police were vastly outnumbered by the thousands of nonviolent protesters who swarmed the nation's capital for Inauguration Day and Saturday's Women's March on Washington.

"We have been pointing out all along that this is a very isolated incident, and by and large, everything is going peacefully and a lot of folks have come to the city to enjoy this historic day, not only the Capitol but walking all around the city," he said.

But many protesters, including permitted marchers, accused security personnel of denying them access to their planned routes.

Ashley Link, 37, made her way to Franklin Square after an ANSWER Coalition protest slated for the Navy Memorial on Pennsylvania Avenue, about a mile away, was effectively blocked by what many there described as onerous security restrictions. She expressed concern that isolated clashes with police would overshadow other messages on display, but sympathized with the rowdier elements in the street.

"I'm all about peaceful protesting, practicing nonviolence, but at the same time, I understand why people are so frustrated," she said. "They are so upset about so many things in our country right now that to make a poster? There's not a poster big enough to cover all the things that people are frustrated about."

Hours earlier, Lysander Reid-Powell, a 20-year-old student from New Mexico, joined in a Black Lives Matter-led blockade of an entrance onto the National Mall.

"I think Donald Trump is a fascist, and it's very easy for people, especially people who are in pain, to slip into fascism," he said. "It's easy for people to feel like the individual has no power and that you're just one small little ant in the big hill, so ultimately all that matters is popular resistance."

As Trump supporters and other spectators began to emerge from their hotels, many in the new president's signature red caps, and head for the security checkpoints on Friday morning, protesters at multiple entry points sought to cut off access by staging coordinated sit-ins. As the swearing-in ceremony neared around noon, hundreds of people remained snarled in long lines.

Three women were chained together at the neck on 10th Street, and more than 150 DisruptJ20 demonstrators surrounded an entrance near the Canadian embassy. "This checkpoint is closed," they chanted, forcing Trump supporters to turn back and walk along Indiana Avenue in search of a clearer path.

An assortment of "pop up" protests also lined the streets surrounding the secure zones on the mall. "We're here to take a stand against the ideas that Trump spouted throughout the course of this campaign -- sexism, Islamophobia, his bigotry and nationalism," said protester Jed Holtz, from New York City.

The protests did not stop at the checkpoints. A half-dozen members of "Democracy Spring," a group that agitates against the influence of money in politics, obtained tickets that placed them within shouting distance of the swearing-in ceremony.

As Trump stepped forward to to take the oath of office, six protesters, each wearing a letter of the word "RESIST," stood up to chant the preamble to US Constitution.

Their shouting made it difficult for those seated nearby -- including former campaign staffers and volunteers, as well as Trump's ex-wife Ivana Trump -- to hear Trump utter the words that officially made him the 45th President of the United States.

The disruption was compounded when, much as it happened at Trump's campaign rallies, his supporters responded, erupting in shouts of "Trump, Trump, Trump!" as they tried to drown out the interlopers.

Liberal groups praised the work of protesters, many of whom traveled from around the country to rail against a president they called "illegitimate" in thousands of signs and songs.

"The only source of light on this miserable day is the massive, multi-racial, multi-generational progressive resistance movement led by women and people of color that's already emerging to confront Donald Trump's agenda of hate and growing stronger every single day," Democracy for America Executive Director Charles Chamberlain said in a statement following the inaugural ceremony.

The anti-Trump protests extended well beyond water's edge, with rallies popping up in London, Hong Kong and Berlin — where demonstrators held a sign that read, "Walls divide." In the West Bank, Palestinians protested against Israeli settlements and Trump's plan to move the US Embassy to Jerusalem from Tel Aviv.

In New York, seven people were arrested at a demonstration outside of Trump Tower, according to the New York Police Department.

On Thursday night in Washington, protesters gathered on 14th Street outside the National Press Club to demonstrate against "DeploraBall," an event organized by some of Trump's most aggressive online supporters. The name riffs off the campaign description of some Trump backers by his defeated opponent, Hillary Clinton, as a "basket of deplorables."

As attendees -- some of whom were clad in suits and red hats, others dressed in gowns -- entered the event, demonstrators chanted "Shame" and "Nazis go home" behind a phalanx of police. Some held signs that read "No Alt Reich" and "No Nazi USA."

The Women's March gets ready for prime time

On Saturday, the Women's March on Washington could attract a quarter million participants, organizers said.

"We're really trying to set a tone of resistance for the coming years," Lacy MacAuley, a DisruptJ20 organizer, told CNN. "Donald Trump represents a shift in our politics in a dangerous, harmful, exclusionary direction. We oppose those policies of hate."

According to Department of Homeland Security chief Jeh Johnson, as many as 900,000 spectators may attend inaugural ceremonies.

Johnson told reporters last week that 28,000 security personnel from dozens of agencies, including local and out-of-town police officers, will be fanned out across the city on Inauguration Day and into the weekend.

Organizers of the march, which begins near Capitol Hill at 10 a.m. ET, now say internal divisions, many of them stemming from a divisive Democratic primary fight, are being put aside in the name of solidarity.

"We have already proven that Hillary and Bernie Sanders supporters can work together against fascism, xenophobia, and racism," Linda Sarsour, a Palestinian-American Muslim activist from Brooklyn, told CNN.

The march, which began with a modest Facebook call in the aftermath of the election, has grown in to what could be one of the larger political demonstrations ever in DC.

There are more than 600 "sister marches" planned around the country and fundraising for the event has largely come in chunks of $20 and $30 online donations.

"It really reminds me of the Sanders campaign," Sarsour said. "A very grassroots, very grass-powered movement."