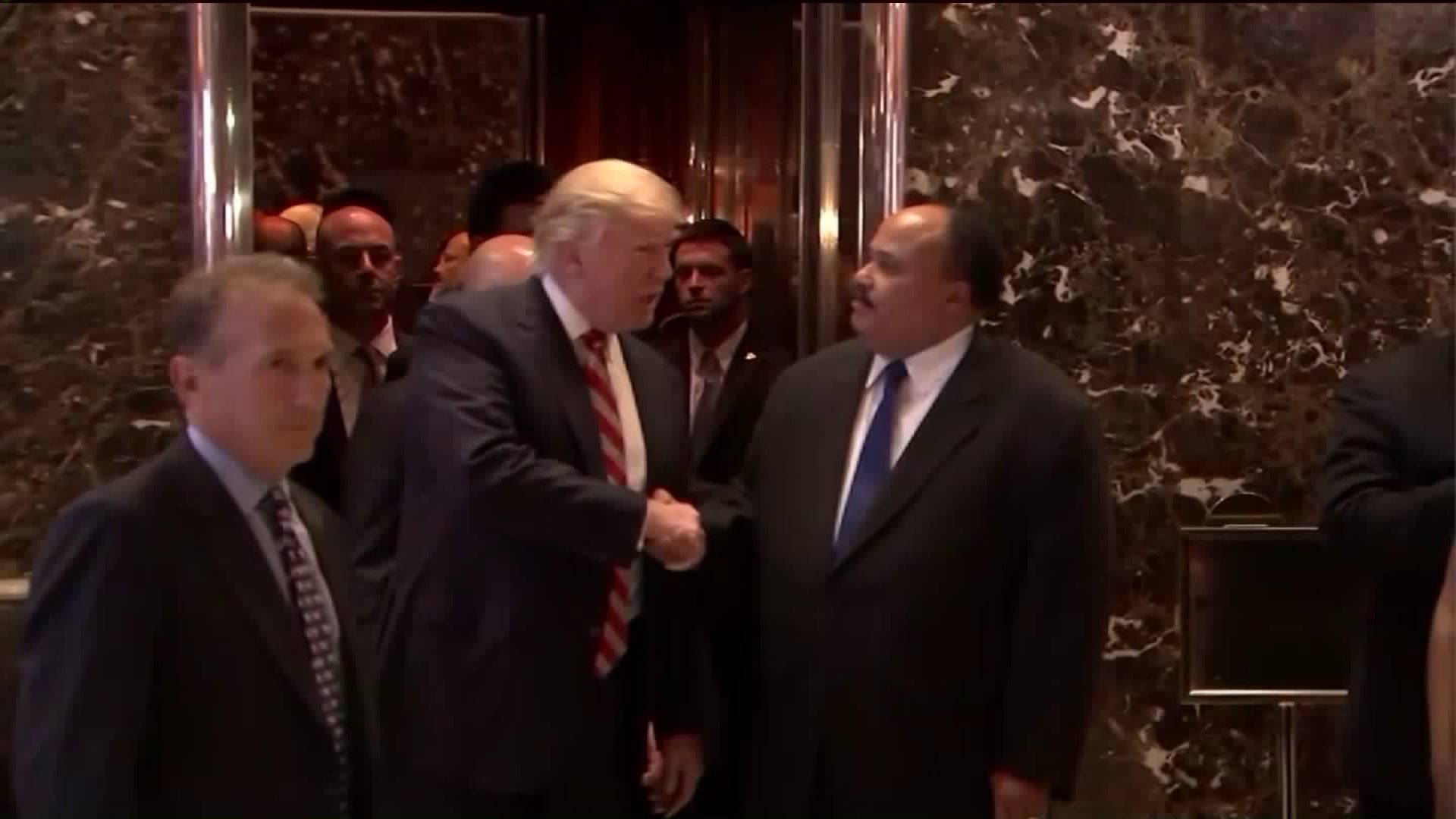 NEW YORK — Donald Trump was met with a cascade of criticism after he chose to tweet disparaging comments about a civil rights icon, Rep. John Lewis of Atlanta, over the Martin Luther King Jr. holiday weekend.

On Monday, however, the day that the country celebrates Dr. King's life and legacy, the president-elect tried to stem the criticism by meeting with the son of the man after whom the holiday is named.

However, even after Martin Luther King III and Trump met and shook hands in front of the cameras, the criticism of Mr. Trump kept coming, with at least one more member of Congress announcing that he'd join more than two dozen fellow members in boycotting Trump's inauguration.

"I think my father would be very concerned," said King, before cameras assembled in the Trump Tower lobby, "about the fact that we have 50-60 million people living in poverty and somehow we got to create the climate for all boats to be lifted."

The meeting between the son of the civil rights icon and the president-elect came two days after Trump tweeted against Georgia Congressman John Lewis. Lewis had declared last week that he was boycotting the inauguration because he considered Trump's election win illegitimate, due to Russian intervention in the process.

During the 1960s, as leader of the Student Nonviolent Coordinating Committee, Lewis participated in multiple marches locked arm in arm with Dr. King. Lewis still has scars from the severe beating he took at the hands of law enforcement during a 1965 march in Selma, Alabama. He's represented the most of Atlanta in Congress since 1986.

"All talk, talk, talk, no action or results. Sad!" Trump tweeted in part about Lewis on Saturday. On Monday, Lewis was unsinkable. Speaking at an MLK prayer breakfast in Miami, he said that access to the voting booth needs to be easy and open to a broad range of people, something Lewis has fought for for more than five decades.

"I know John well," said New York congressman Jerrold Nadler in an interview. "He should not be demeaned in this way [by Trump]."

Nadler made the comment to explain why he's joining four other members of New York's congressional delegation -- Jose Serrano, Nydia Vasquez, Adriano Espaillat and Yvette Clarke -- in boycotting Trump's inauguration. They, in turn, are among 26 members of Congress, all Democrats, who are boycotting.

Still, that means that more than 500 members of the House and Senate, from both parties, will be in attendance.

MLK III said that while he respects the decisions to boycott, this is time for healing.
"In the heat of emotion," he said in the Trump Tower lobby, "a lot of things get said on both sides. And I think that at some point I am, as John Lewis and many others are, a bridge builder. The goal is to bring America together."

King had gone to Trump to discuss the possibility of the president-elect requiring photos on Social Security cards as a way to provide voter IDs to all eligible voters, once Trump takes office. King said in a statement and in a recent op-ed in The Washington Post that he was confident that President-elect Trump would increase voter access.