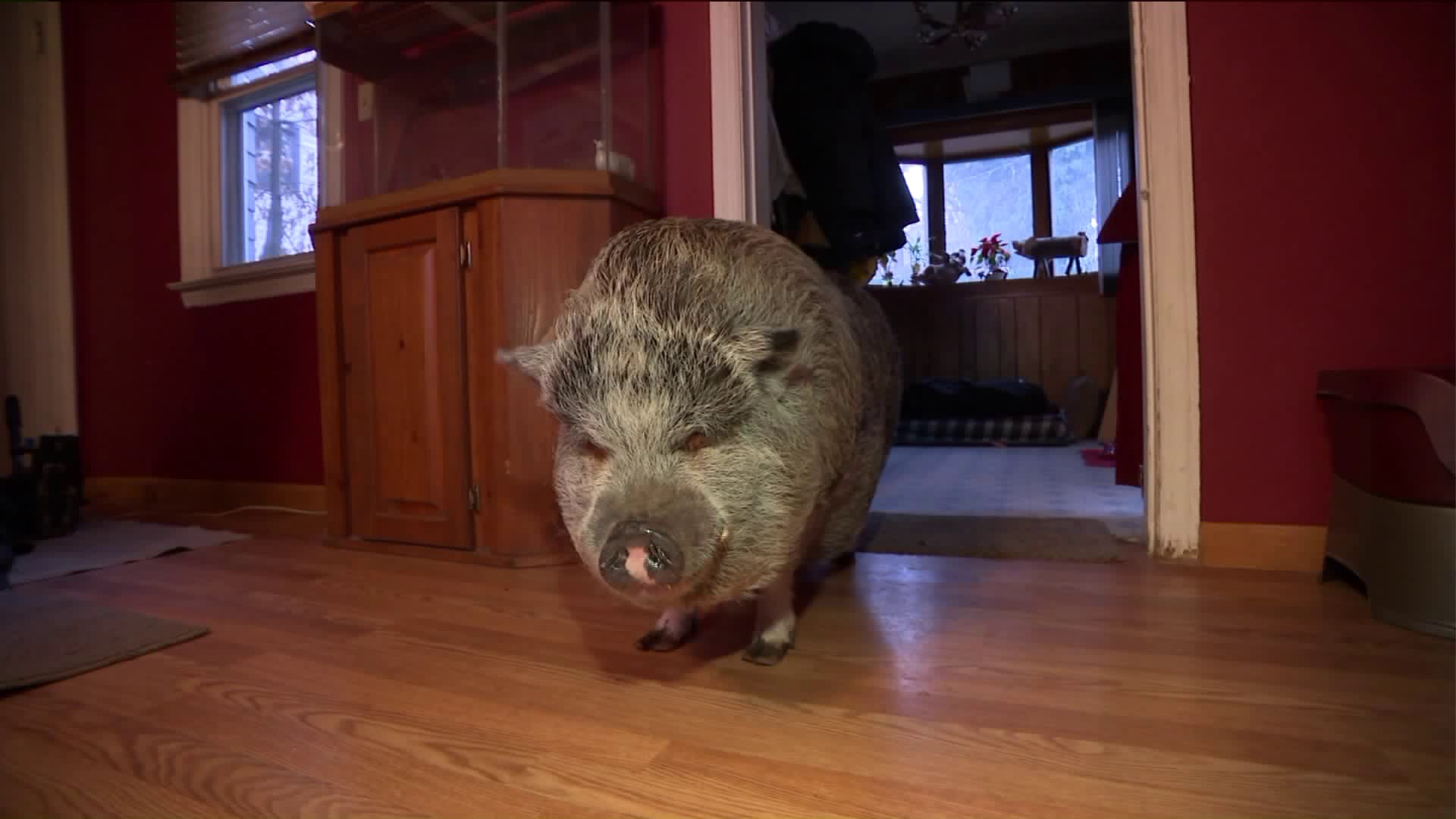 A Staten Island woman is fighting to keep "Wilbur the Pig" after someone called 311 and complained about the animal.

STATEN ISLAND – "Wilbur the Pig" has been living with Cristy Matteo in her Staten Island home for the last five years. She considers him part of her family, but the city wants to put an end to that.

"[He's] very gentle, he takes food," Matteo said. "I could do anything for him. I could stick my hand in his mouth."

Does Wilbur seem like a wild animal? Hardly. But after someone called 911 called 311 to complain – a New York City health department inspector issued a violation saying that Matteo's owner was "unlawfully harboring... a wild animal."

Matteo wanted to have a pig in the first place because she says they're "clean animals, affectionate and loving."

Wilbur is a Juliana pig, meant to bred and become pets. He's an indoor pig and doesn't smell. He loves to be belly rubbed and gets along well with Matteo's dog Milo – and occasionally goes for a ride in the car with Matteo.

"He doesn't bother anyone," Matteo said. "He goes out, he does his business and he comes back in the house."

Wilbur uses the doggy door – a tight fit – to get out the yard.

He's just like a big ole peaceful pig? "Yup, that he is," says Matteo, who also has a tattoo of Wilbur on her back.

Her pig is registered with the National Service Animal Registry as an emotional support animal.

'He knew my father was sick and he knew by father needed companionship," Matteo said.

When Matteo's father, who is undergoing cancer treatments, is in the house Wilbur goes right to him.

"He would brighten my father's spirits," Matteo said.

Nevertheless, the health department took Matteo took court because "The Health Code prohibits pigs to be kept in New York City." Among the reason for that -- "there is no USDA – approved rabies vaccine for pigs."

"They're saying he can get rabies," Matteo said. "Meanwhile there is no documented cases of rabies in pigs."

Matteo got letters of support from her father's oncologist who wrote "Mr. Matteo has greatly benefitted from the support of 'Wilbur,'" from her own psychiatrist who wrote "Wilbur provides great comfort and therapeutic benefits," and from State Senator Tony Avella, who is sponsoring a bill that would allow pigs as pets as long as they're under 200 pounds.

Wilbur is a svelte 180 pounds. Unfortunately it made little difference to the city, who says Matteo has until January 31 to get rid of Wilbur.

"It's like losing a child," Matteo said. "He's like a child to me. He acts like a child. Pigs have the mentality of a three-year-old child."

So where will Wilbur go?

"I have two places that are willing to take him," Matteo said. "But he's not an outside pig. He's strictly an indoor pig."

What a shame. If you need help or have a story idea, email Arnold Diaz at whatashame@pix11.com, or contact him on Facebook or Twitter, using #pix11shame.