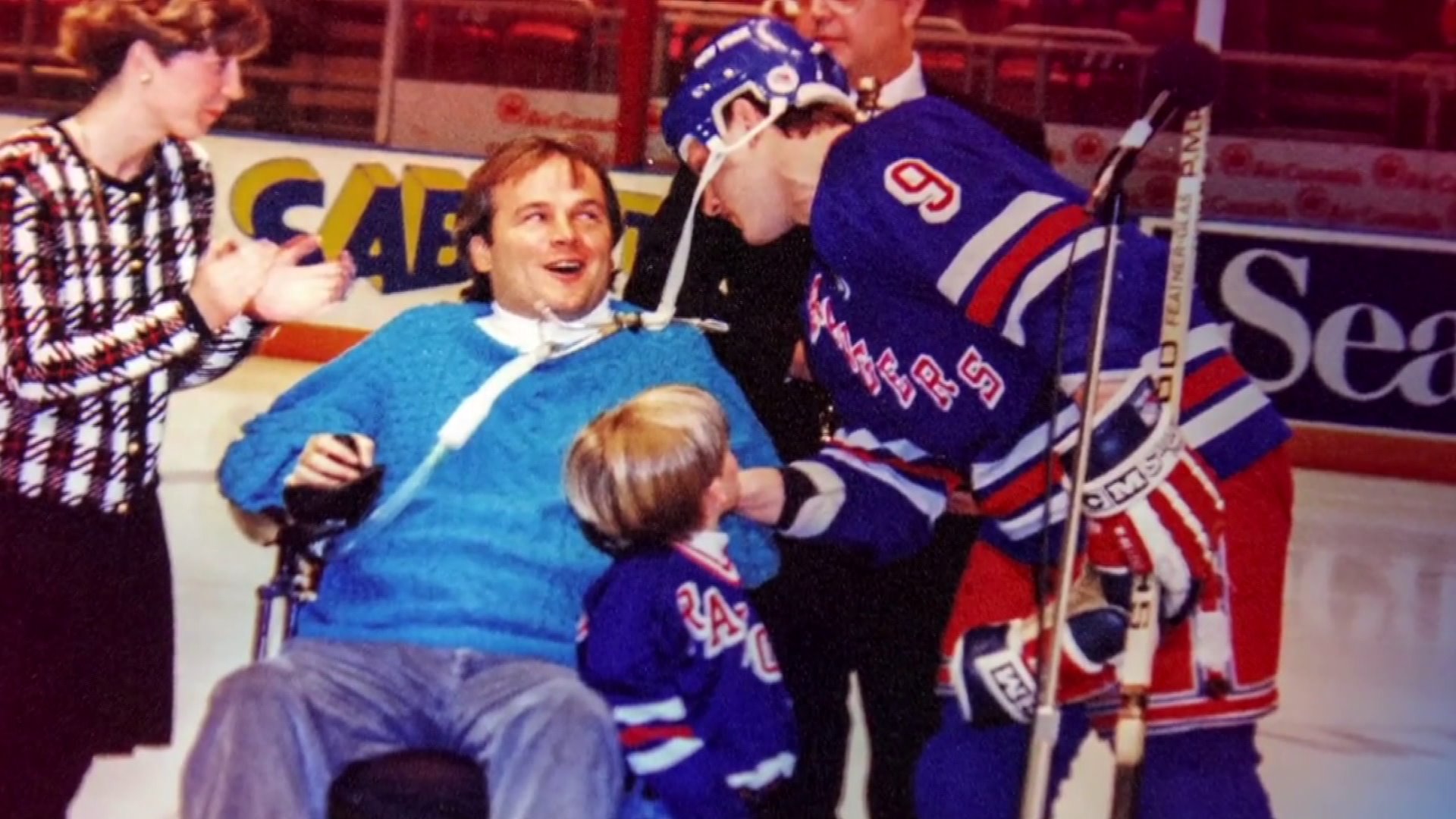 Steven McDonald said that his love of Rangers hockey "helps me to live day to day with the way that I am. It`s been a great gift."

NEW YORK — As the NYPD and St. Patrick’s Cathedral prepared to host a massive funeral Friday for Detective Steven McDonald —who inspired the city with the way he handled a debilitating injury — the New York Rangers hockey team released a touching video for a person it said personified the “Blueshirt Faithful.”

As of Thursday afternoon, the moving tribute had been viewed by more than 1.6 million people on Facebook alone.

The video runs just over three minutes, and shows McDonald talking about the enormous impact the team had on him, his wife, and son — after he was paralyzed from the neck down on July 12, 1986.

After his only child, Conor, was born in 1987, Rangers hockey was a way for them to bond.

The video shows Conor as a pre-schooler sitting right near the Madison Square Garden ice rink with his dad, watching a game.

It was a joyful ritual that continued until McDonald’s death, and it’s captured on video.

Conor followed his father into the NYPD and wore his dress uniform during annual ceremonies for the “Steven McDonald Extra Effort Award” — which was presented by the Rangers every year since 1988.

It’s an award voted by the fans for the player who goes above and beyond the normal call of duty.

“Conor and I are unlike so many other fathers and sons….never shot a puck together or had a catch together. Enjoying sports and life was him sitting on my lap with the New York Rangers,” Steven McDonald said in a recent interview with the team.

McDonald said near the beginning of the video that his love of Rangers hockey “helps me to live day to day with the way that I am. It’s been a great gift.”

The team — and the city — considered McDonald a great gift.

At age 29, the young police officer was shot in the head, throat and spine by a teen bike thief in Central Park.

He would spend more than 30 years paralyzed from the neck down, yet he lived a life of faith and forgave the 15 year old shooter, Shavod Jones.

On Thursday, a recipient of the Steven McDonald Extra Effort Award—former Rangers left wing Adam Graves—wrote a beautiful essay about McDonald that was posted on the New York Rangers website.

Graves noted he, like McDonald, was the son of a police officer, and when he arrived in New York in 1991, he looked forward to meeting Steven.

“When we talk about heroes and courage and character,” Graves wrote, “Steven not only exemplified those qualities but was the standard bearer for them. He taught a city about forgiveness and compassion in the face of tragedy. His experience empowered him to impact his community and the city in a positive and extraordinary way few, if any, have done.”

Graves also talked about McDonald’s love for the Rangers.

“Steven’s passion for the Rangers was second to none. Anyone who had the opportunity to watch a game with him saw that passion first hand. His knowledge of not only the Rangers but the game itself was remarkable. I can’t help but smile thinking about those moments. How True Blue he was at heart.”

Graves said when he received the Steven McDonald Extra Effort award, “it was one of the most humbling experiences of my life.”

“This award will now take on more meaning following his passing. We can reflect and understand how lucky we as a community were to have Steven in our lives.”