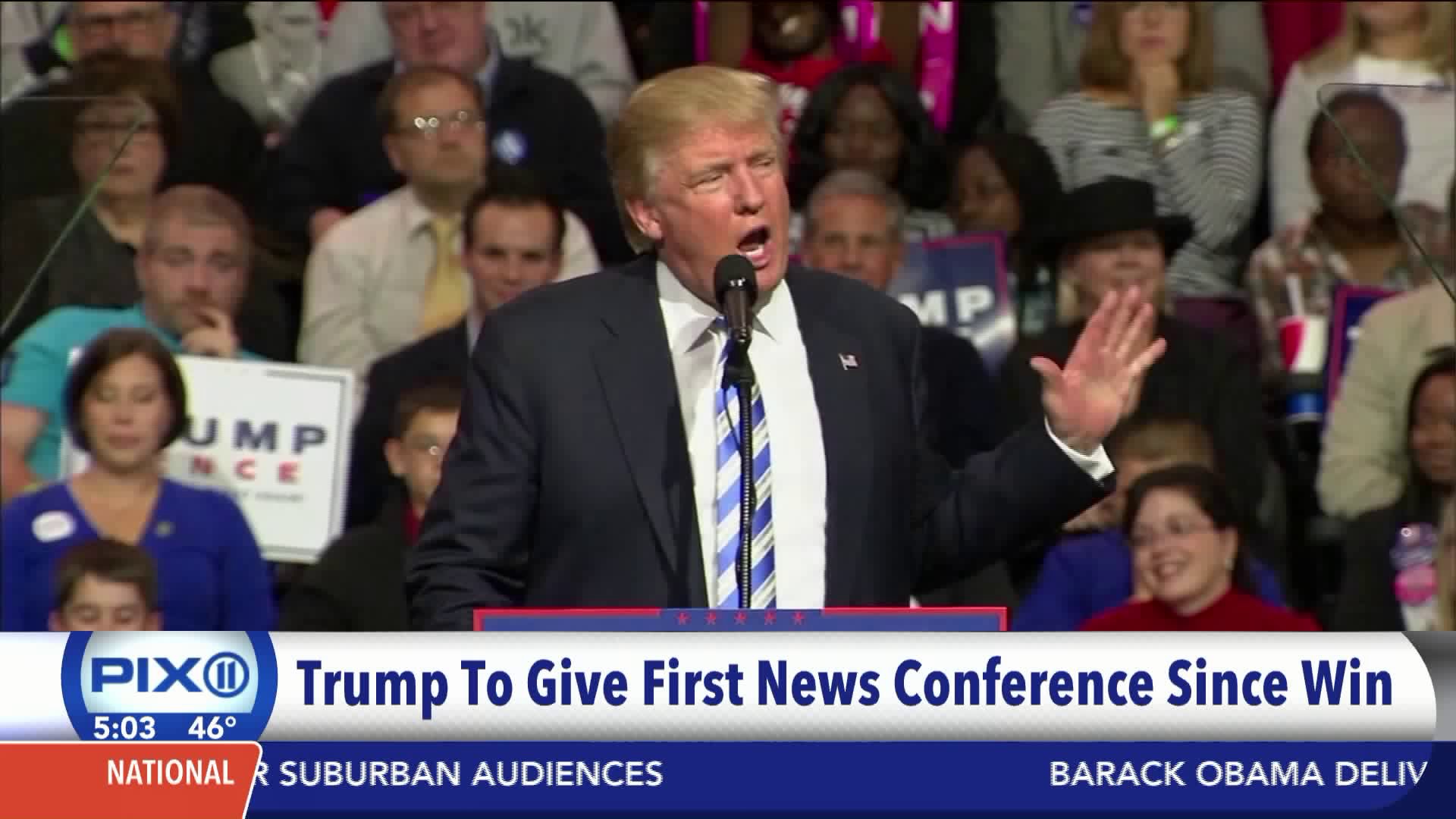 Comments come hours after lashing out on Twitter about Russia ties reports.

NEW YORK — President-elect Donald Trump said for the first time he believes Russia was behind hacking ahead of the election.

Donald Trump speaks at a news conference — his first since being elected president — at Trump Tower on Jan. 11, 2017, in New York City. (Spencer Platt/Getty Images)

“I think it was Russia,” Trump said during his first news conference as President-elect.

He added that Russia is not the only nation that hacks US targets and accused Democrats of not having sufficient cybersecurity programs.

The news conference opened with his spokesman, Sean Spicer, slamming a “political witch hunt” following reports that Russian operatives claim to have compromising personal and financial information about Trump.

Vice President-elect Mike Pence also criticized the media before introducing Trump, who kept up his criticism of US intelligence.

“I do have to say and I must say that I want to thank a lot of the news organizations here today because they looked at that nonsense that was released by maybe the intelligence agencies,” Trump said. “But maybe the intelligence agencies which would be a tremendous blot on their record if they did that. A thing like that should never have been written, it should never have been had and it certainly should have never been released.”

He reiterated that he doesn’t plan to release his tax returns, saying they are under audit and don’t include relevant information

The news conference follows exclusive reporting by CNN on Tuesday that classified documents presented last week to President Barack Obama and Trump included the allegations about Russia. The allegations were presented in a two-page synopsis that was appended to a report on Russian interference in the 2016 election and drew in part from memos compiled by a former British intelligence operative, whose past work US intelligence officials consider credible.

The FBI is investigating the credibility and accuracy of these allegations, which are based primarily on information from Russian sources, but has not confirmed many essential details in the memos about Mr. Trump.

The news conference, delayed from December, was scheduled for Trump to outline how he will address questions about possible conflicts-of-interest related to his vast business empire. Trump appeared beside a large pile of files he claimed were pertinent to the companies that are going to be placed in a trust to be run by his sons.

After taking a handful of questions, Trump turned the event over to Sheri Dilon, an attorney who was on hand to discuss Trump’s business interests.

She said Trump planned to put in place a structure that will “completely isolate him from the management of the company.”

“He further instructed that we build in protections that will assure the American people that the decisions that he makes and the actions he takes as President are for their benefit and not to support his financial interests,” she said.

Trump will place all his financial and business assets in a trust, Dillon said. The Trump organization meanwhile will not enter into any new deals abroad and all domestic deals will be subject to a heavy vetting process. The firm will also appoint a new ethics officer, she said. The President-elect has also terminated a number of deals set to close shortly, a step that had cost him millions of dollars, she said.

Dillon argued that the decision had been made not to put all Trump’s assets in a blind trust or to divest of all his assets because it would be impractical. She also said that Trump should not be forced to destroy the business that he had built up.

“President Trump can’t unknow he owns Trump tower,” Dillon said, explaining why a blind trust would not be a workable solution to addressing conflicts of interest issues while he is President.

Dillon said Trump would take other actions to avoid the appearance of a conflict over the Emoluments Clause of the Constitution, which prohibits the president from accepting gifts from foreign governments unless authorized by Congress. She said it was unfair to apply the clause to Trump’s “arms length” transactions that he had nothing to do with or was not aware of.

“Just like with conflicts of interests, he wants to do more than what the Constitution requires,” she said. “President-elect Trump has decided and we are announcing today that he is going to voluntarily donate all profits from foreign government payments made to his hotels to the United States Treasury.”

When he returned to the podium, Trump turned to policy, vowing to press ahead with a near simultaneous repeal and replacement of Obamacare at the same time, rejecting the approach of some Republicans on Capitol Hill who worry that rushing could create problems.

“It will be repeal and replace. It will be essentially simultaneously,” he said, saying the two goals would be accomplished in the same week, day or even hour.

Trump reiterated that he will build a wall on the southern border and Mexico will pay for it, but defended his decision to ask Congress to fund it initially.

“We are going to build a wall,” he said, adding that he didn’t want to wait a year and a half to finish negotiating how Mexico would pay for it. “Mexico, in some form … will reimburse us.”

He added that the financing was more likely to take the form of a tax than a payment.

The President-elect also said he had been looking at the list of 20 potential Supreme Court nominees he had proposed to replace late Justice Antonin Scalia.

He said he would announce his decision “within two weeks of the 20th, probably the second week.”

More than a test

The news conference amounts to more than a test of his familiarity with policy questions and the duties and responsibilities that a President must shoulder. Coming hours after Obama’s farewell speech in Chicago, the news conference reinforces a sense of historic change pulsating through Washington.

The confrontational tone he displayed at points, especially when it came to critiques of the press, provides hints about the demeanor and attitude he will adopt as commander-in-chief and head of state.

Trump will enter the White House with the most estranged relationship with journalists of any new President in recent memory after repeatedly branding the press “dishonest” and using it as a foil during his campaign and transition.