Finally free of a respirator, Steven McDonald is mourned — and celebrated — in Rockville Centre 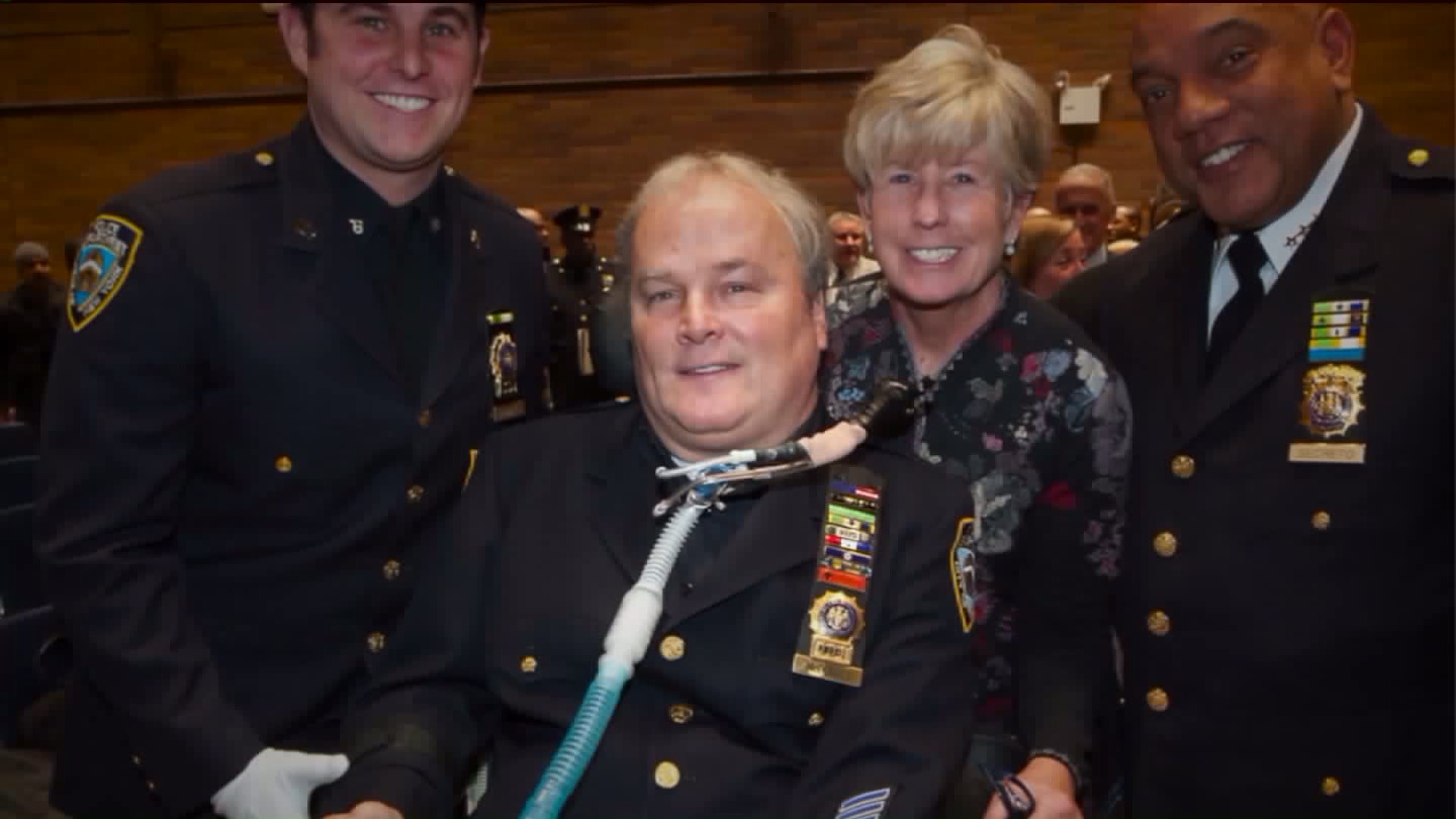 McDonald was the most famous police officer in NY, because he lived more than 30 years with a debilitating gunshot injury that left him paralyzed from the neck down.

ROCKVILLE CENTRE, N.Y. — The first thing you noticed when entering the wake for NYPD Detective Steven McDonald were the 15 tables of pictures.

All of them framed, they showed the inspirational cop with Pope John Paul II, movie star, Tom Hanks, the late John Cardinal O'Connor, and also with his son, Conor, as a child.

McDonald was probably the most famous police officer in New York, because he lived more than 30 years with a debilitating gunshot injury that left him paralyzed from the neck down, as he went about his business as an active duty detective speaking to police recruits — and carrying a message of forgiveness.

"Steven was the heart and soul of the NYPD," said New York City Police Commissioner James O'Neill, as he left McDonald's wake in Rockville Centre, where McDonald grew up. "For the last 30 years, Steven never quit. He continued to be a man of faith and to preach peace."

First Deputy Commissioner Benjamin Tucker called McDonald "a gift to this city" and the Chief of Department, Carlos Gomez, said "He was stronger than any of us here."

McDonald was laid out in full, NYPD dress uniform, and it was poignant to see him in repose with no respirator, which he needed to breathe for more than three decades.

McDonald's widow, Patti Ann, greeted mourners with warmth and grace, Their 29-year-old son, Conor, an NYPD Sergeant, was also dressed in full uniform and thanked PIX11 for our coverage of his father's remarkable story.

McDonald was 29 years old and working in the Central Park anti-crime unit. He was responding to reports of a robbery and came upon a 15-year old suspected bike thief. The suspect, Shavod Jones, shot McDonald in the head, throat and spine. The injury left McDonald paralyzed from the neck down for the rest of his life.

Patti Ann McDonald was three months pregnant at the time and gave birth to Conor in January 1987. Conor will be 30 years old later this month.

Steven McDonald suffered a massive heart attack last Friday and, after he was taken off life support Tuesday, his son posted a moving message on Facebook.

"I'll see you on the other side Daddio," Conor wrote. "I love you forever."

Father and son used to march together in the annual St. Patrick's Day parade. Steven and Patti Ann raised Conor in Malverne, where Patti Ann has served as Mayor since 2007.

Residents of Malverne and Rockville Centre came out to pay respects to McDonald. Many of them had seen him in church over the years.

"He was always at Mass," Rockville Centre resident Mary Shanley Hicks said. "His wife was always by his side. He took his cross with him for 30 years. He wanted to give an example to the rest of us on how to live our lives."

Michelle Kashuba grew emotional as she recalled seeing McDonald at Mass for many years.

"My boys used to be altar servers, and I would see him in his wheelchair."

Patrick Lynch, president of the Policeman's Benevolent Association, said of McDonald, "He transcended religion and communities. He became a symbol for what's best about the New York City Police Department."

McDonald's wake will continue at the St, Agnes Parish Center on Thursday.

A large funeral Mass will be celebrated at St. Patrick's Cathedral in Manhattan at 9:30 a.m. Friday.