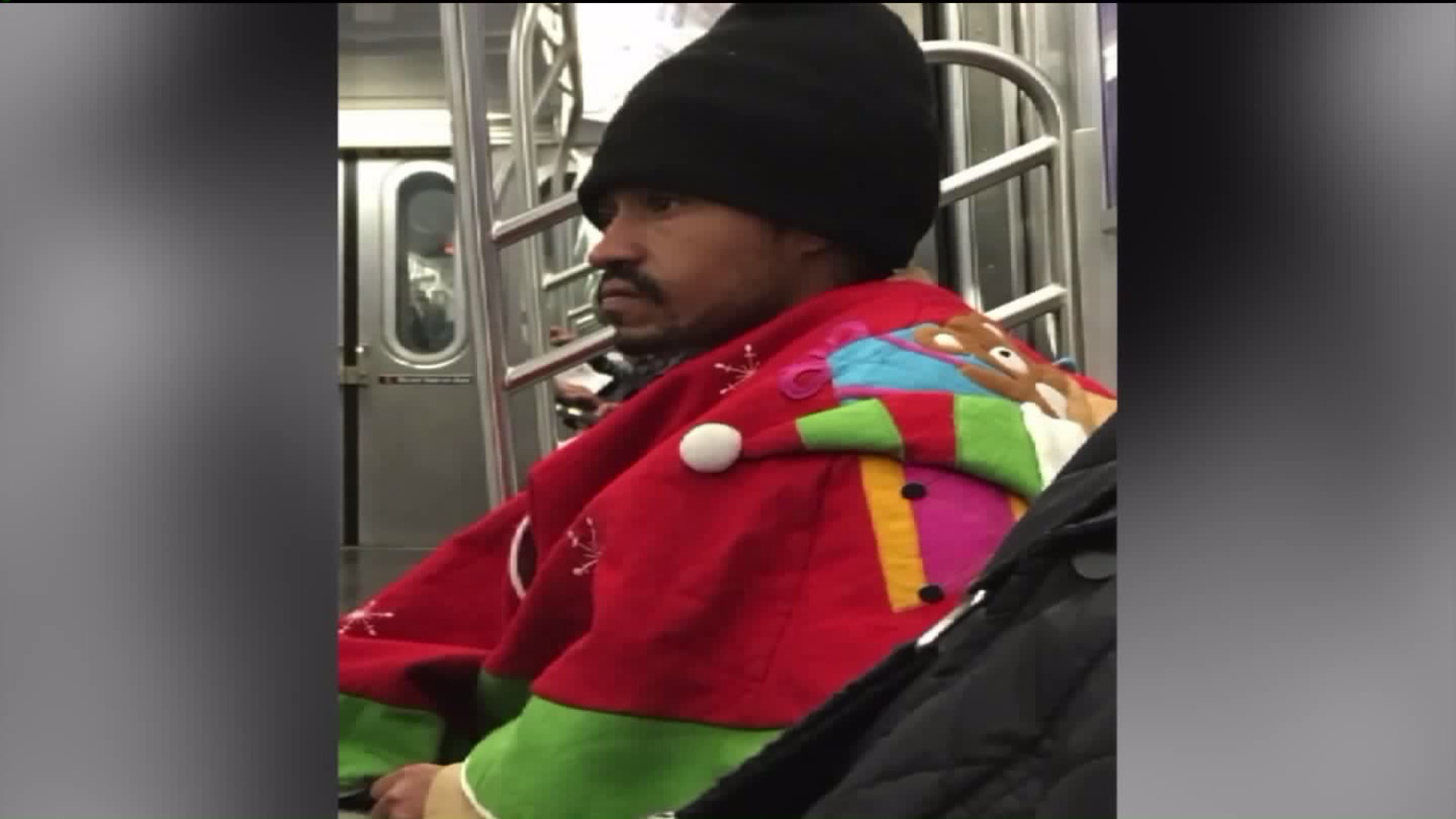 A woman followed into a Manhattan subway by a man dressed as an elf and allegedly clutching an ice pick spoke exclusively to PIX11 on Thursday. 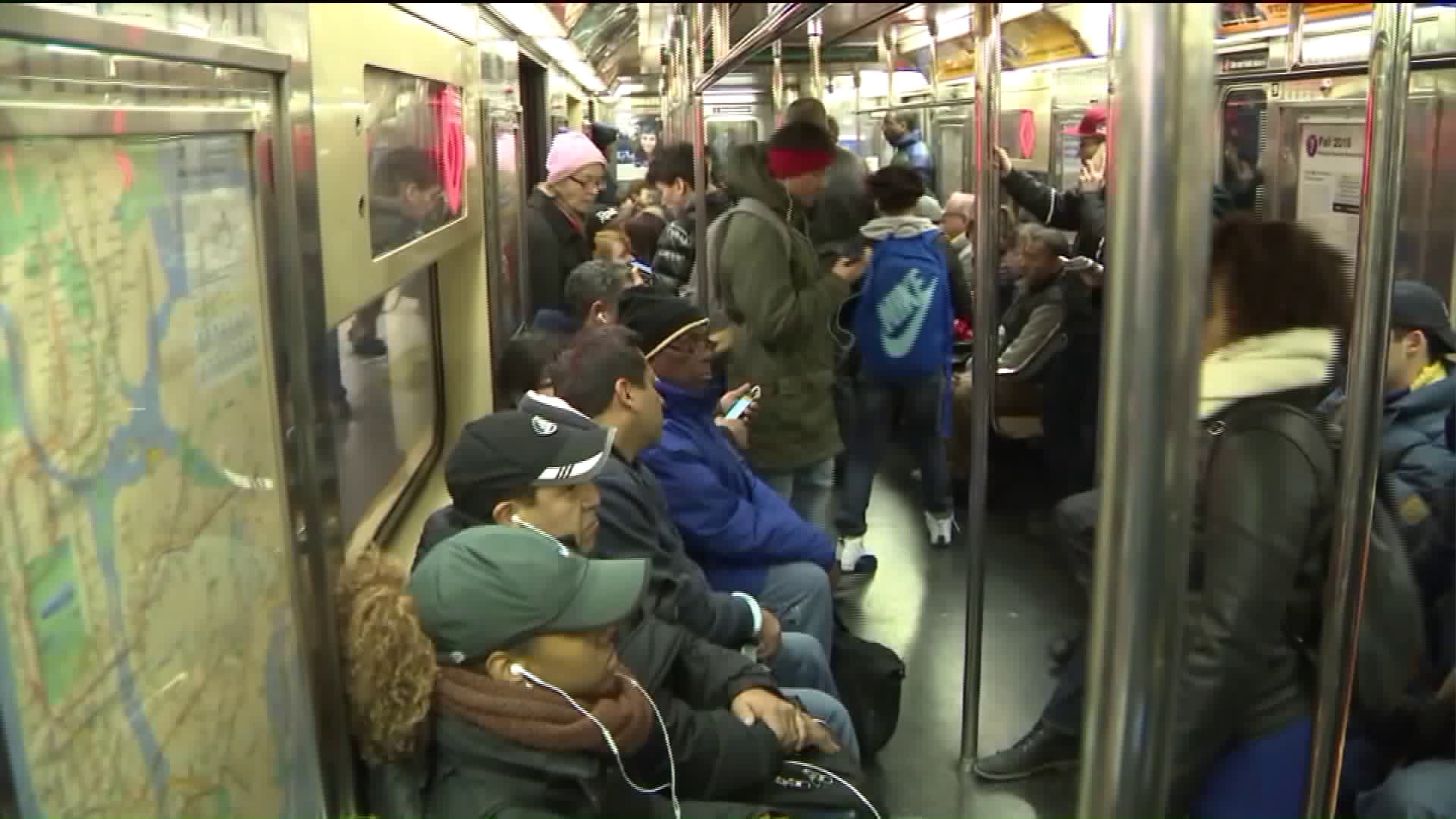 MIDTOWN EAST, Manhattan — A woman followed into a Manhattan subway by a man dressed as an elf and allegedly clutching an ice pick spoke exclusively to PIX11 on Thursday.

A man wearing a Christmas tree skirt and allegedly holding an ice pick is seen on Dec. 31, 2016, aboard an N train in Manhattan. (NYPD)

Shortly after midnight on New Year's Eve, the victim says she left a midtown movie theater and headed to the N train at 59th Street when she spotted a man who was donning a Christmas tree skirt around his neck.

While smoking a cigarette by a turnstile, he appeared to be watching the woman then began to follow her, she later told police.

The 29-year-old woman, who asked not be identified for her own safety, told PIX11 she walked along the platform, which she says was crowded for that time of night being that it was shortly after the ball dropped.

"To see if he was truly following me, I started weaving in and out of people on the platform and noticed he was still right behind me," she said.

That is when she said she noticed the individual was holding what appeared to be an ice pick, and she immediately began asking others on the platform for help.

"I looked for anyone who could protect me," she said. "I tapped a guy in his mid 30s and told him I was being followed by a man with an ice pick, and he brushed me off."

The train rolled into the station, and she boarded three cars ahead of the man, but noticed he appeared to be making his way toward her car, she says.

Still looking for help, the woman says she approached a couple, who said she could sit between them and act like she knew them as the male companion pulled out pepper spray.

While sitting there, the man dressed like an elf came into their car and sat next to them.

"The homeless guy offered him a mint," she said.

The trio ignored the man and exited the train at 42nd Street while the man remained on board, continuing to an unknown destination.

"I thank (that couple) from the bottom of my heart. I do not know what would have happened if no one helped me," she said.

The NYPD took a report, but only after the woman says she had to walk to the transit police hub the following day because an MTA employee ignored her complaints that night, and after waiting on hold with 911 for 20 minutes, and seeing no signs of police, she decided to hang up and make her way home.

The MTA told PIX11 News "we will investigate" what happened on the platform that night between the woman and the transit worker.

PIX11 News has reached out to the NYPD, as well, but has not received a response by the time of publication.

The man, as described in a police report, stands 5 feet 3 inches tall, weighs about 145 pounds, has brown eyes, black hair and medium complexion. That night he wore black shoes and a red Christmas tree skirt.