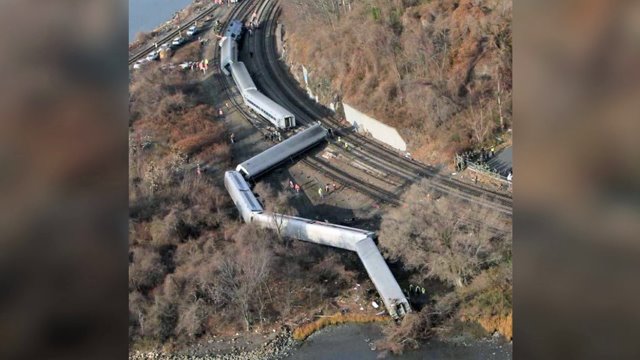 A federal report indicates that the commuter rail engineer whose train was speeding when it derailed in New York City, killing four people, went 24 mph over the speed limit on the same run a few days earlier.

NEW YORK — The engineer who fell asleep at the controls of a speeding Metro-North train that derailed killing four people will receive a lifetime disability pension.

The Journal News reports that William Rockefeller will receive $3,200 a month from Metro-North Railroad.

Rockefeller was at the controls of a Metro-North train that derailed in the Bronx in December 2013. Four passengers were killed and dozens were injured.

Prosecutors said Rockefeller fell asleep at the controls. They declined to prosecute him.

The Metro-North pension is in addition to Rockefeller's federal railroad retirement pension. The amount of that pension has not been disclosed.

Rockefeller has filed a $10 million federal lawsuit against Metro-North. He claims the commuter railroad was to blame for the accident.