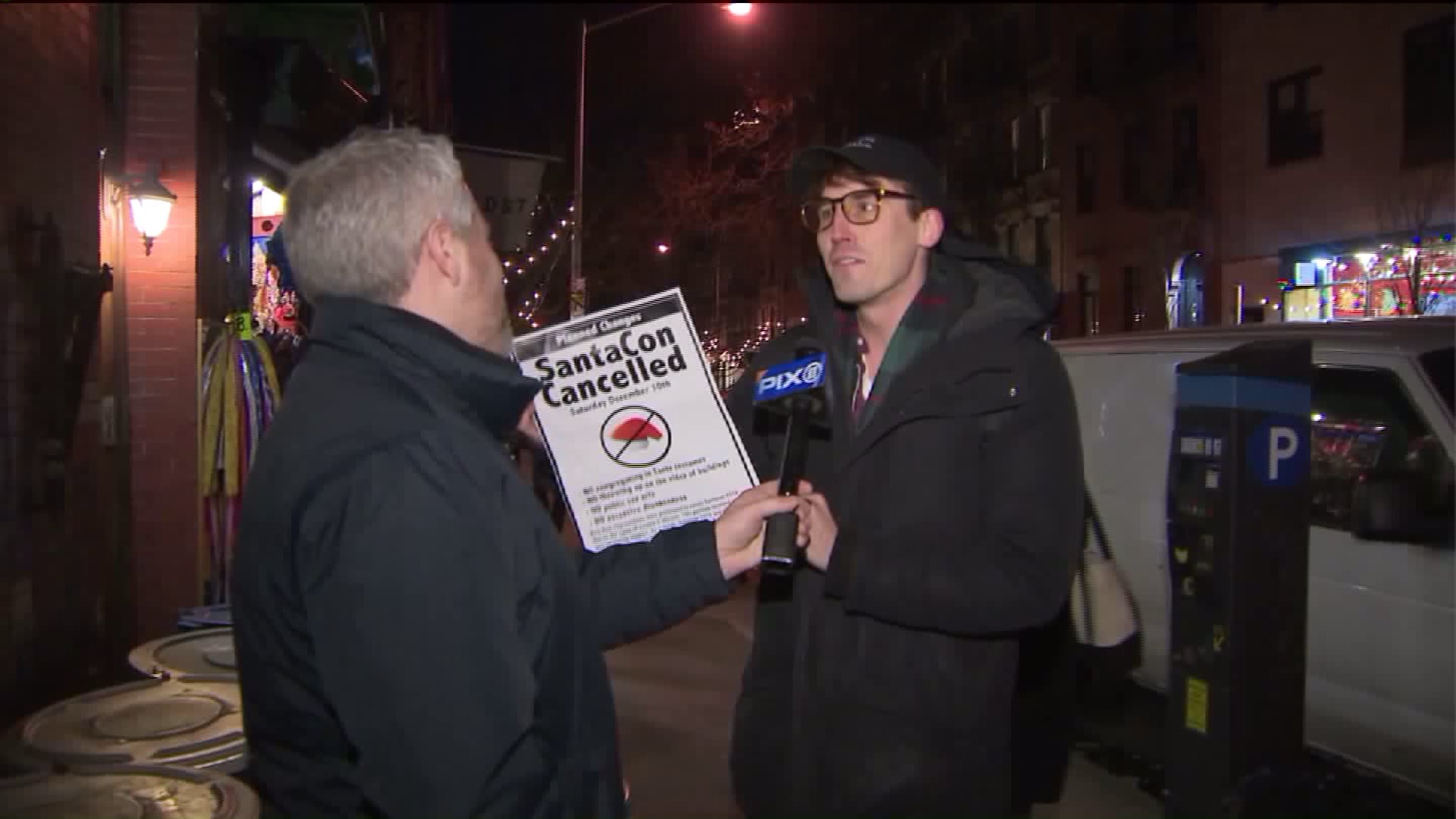 NEW YORK — On the eve of SantaCon, some local residents are trying their best to derail the annual bar crawl by posting fake fliers claiming the event has been canceled.

"New York City residents have petitioned to cancel SantaCon 2016 due to the types of people it attracts," the sign read. "This petition received overwhelming support. As a result, SantaCon 2016 and all future SantaCon celebrations have been cancelled within New York city limits. Residents of New York City thank you for your cooperation."

The poster also banned a list of activities, including "NO congregating in Santa costumes," "No throwing up on the sides of buildings," "NO public sex acts," and "NO excessive drunkenness."

Don't fall for the fliers — the Con is still on.

SantaCon organizers said on its site the reports were not sure and that some were trying "to spread misinformation."

The signs were created by East Village residents who see the annual event as a seasonal pain.

"We're not grinches. If you want fun, you should have fun," an East Village resident said. " But it's not just one bar. It's people coming in and getting into fist fights."

"The idea was to catch your eye and to get people talking," the resident said. "And I think it did."

The fliers have been taken down as of Friday night.

A spokesperson for the NYCR, or New York City Residents, who are responsible for posting the fliers, said in a statement to Gothamist:

"Our country feels so divided right now that we are all searching for things that unify us. The one thing that I have found that we all have in common is our disdain for SantaCon. Over the past few years myself and others have witnessed several horrible acts including but not limited to; sex acts in aisle 4 of the Duane Reade on 14th and 3rd, countless fist fights, and excessive vomiting."

"We have reached out to organizers and asked them to cancel but have not heard back. We hope they will come to their senses. We hope the organizers hear us loud and clear and are aware that we will be out in force tomorrow to stop SantaCon if they don't cancel."

The spokesperson also told Gothamist a group intends on protesting the event Saturday at Bar 13.

The annual bar crawl draws thousands of participants dressed in Christmas-themed costumes. However, local residents have loathed the day-long bar hopping event because of the rowdy drinkers that roam through the neighborhoods.

Organizers have moved the starting point from Williamsburg to Flatiron in Manhattan. SantaCon participants will meet at the Flatiron Building Plaza on 23rd Street and Broadway between 10 and 11 a.m.

The route stretches from East Village to midtown. For more information, head over to the SantaCon website.