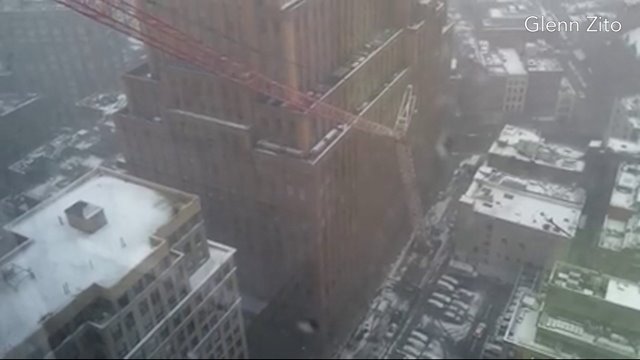 LOWER MANHATTAN — A crane collapse in TriBeCa that killed a man as he was sitting in his car is being blamed on the operator who was maneuvering the massive machinery during a blustery snow squall, according to the Department of Buildings.

It happened on Feb. 5 , a snowy morning that was so windy construction workers made the decision to lower the crane as a safety precaution. But as it was being lowered, the crane collapsed onto Worth Street, leading to the death of David Wichs and injuring multiple others with falling debris.

DOB investigators found the crane operator, identified in the agency's report as Kevin Reilly, failed to secure the crane the night before the collapse and lowered the main boom of the crane at an “improper angle,” causing it to become unstable and topple over.

The operator’s license has been suspended and he’s no longer allowed to operate cranes in New York City. A case has been filed to revoke his license permanently, the DOB said.

The crane’s 565-foot-long boom landed across several cars, smashing their roofs. Wichs was sitting his car when the giant crane came crashing down, killing him.

The 38-year-old was born in Prague and immigrated to the U.S. as a teenager. He graduated with a degree in mathematics from Harvard University and worked at the New York-based computerized financial trading first Tower Research Capital, his sister-in-law Lisa Guttman told the Associated Press at the time.

Guttman called Wichs “the most special person ever.”

The collapse was caught on video by an electrician, Glenn Zito, who was on an upper floor of a nearby building and happened to be filming the lowering of the crane when it suddenly crashed onto the street with a loud, sickening thud. (Video is embedded directly below)

Wind speeds were about 20 mph the morning of the collapse.

The deadly incident inspired the creation of a safety measure regulating construction sites during especially windy days. That new law states that if winds clock in at more than 20 mph, cranes should not be erected.