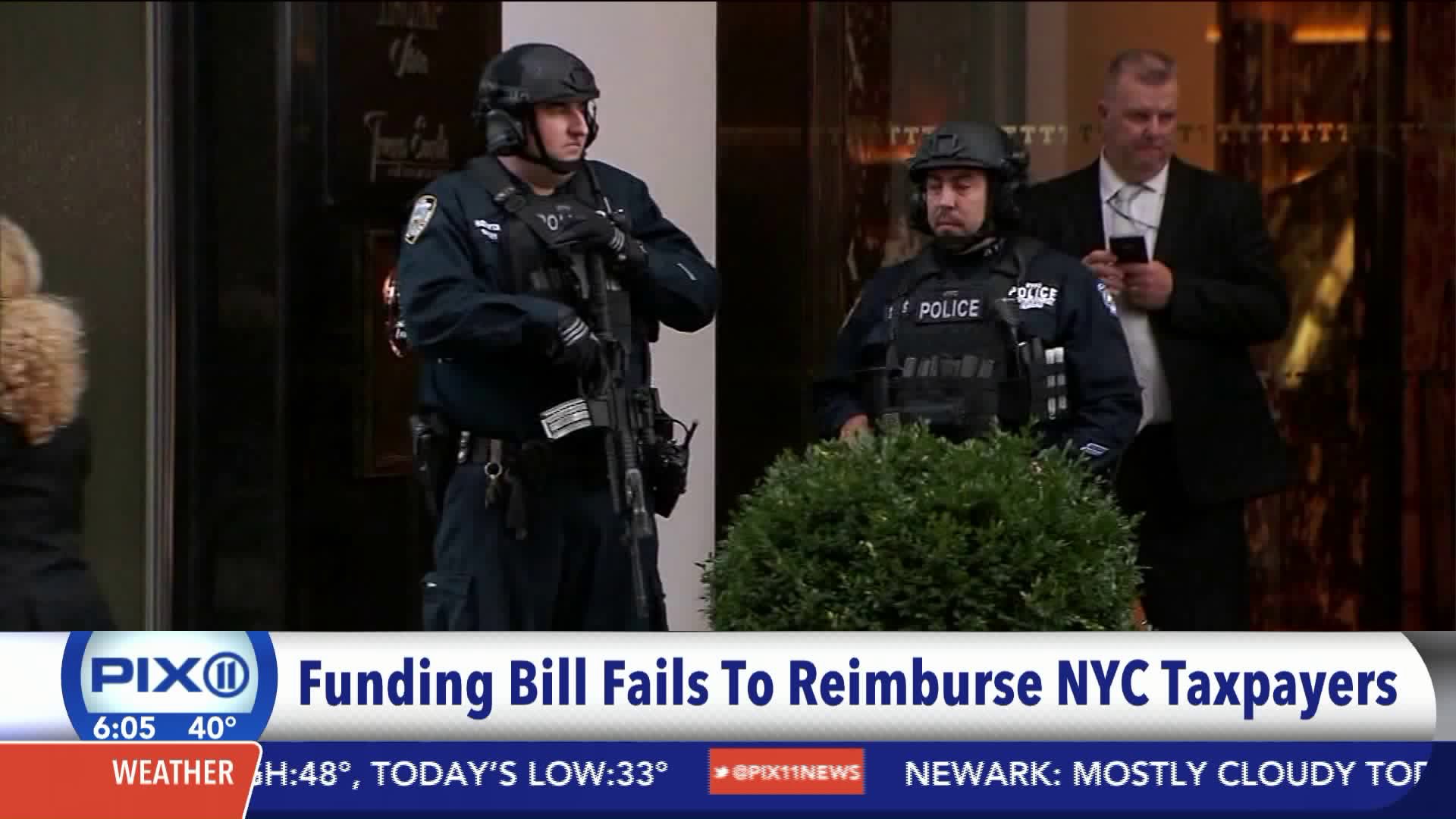 NEW YORK — With the increased costs of securing Trump at his midtown Manhattan high rise — costing $1 million a day to protect the President-elect as well as his children and their families — GOP and Democratic leaders added $7 million in the bill to reimburse New York City police and other agencies.

New York City Mayor Bill de Blasio and the Obama administration submitted a request for $35 million from the federal government to defray the costs — an amount that comes to roughly $500,00 a day.

"Republicans' failure to fully reimburse NYPD for its efforts to protect President-elect Trump is beyond disappointing. The $7 million in funding that this bill does provide must be considered a down payment on the way to making NYC whole," Rep. Nita Lowey, the top Democrat on the Appropriations panel, said in a written statement to CNN.

De Blasio said at a news conference Monday that he would send letters to President Barack Obama, Congress and administration officials to "formally initiate" a reimbursement process for security costs from Nov. 8, election day, through Jan. 20.

Trump's primary residence and his transition team's base of operations are located in a skyscraper in midtown, a neighborhood filled with "hundreds of thousands of people ... at any given moment," according to the letter.

"This is a highly-trafficked, dense urban environment, and one that presents an unprecedented and unique target for potential terrorist activity," de Blasio wrote in a letter to Congress. He lists nearby landmarks like Tiffany's, Louis Vuitton, Central Park and St. Patrick's Cathedral. "No other President in modern history has had his primary residence located in such a densely-populated neighborhood."

The letters also suggest that the high cost of protecting a president elect is not an expense that would be automatically reimbursed to New York. De Blasio says that security expenses "are currently borne exclusively by the City's taxpayers and are not otherwise reimbursable under existing federal law or programs."

He cites a 1976 federal code that only allows cities of up to 7,000 people to seek reimbursement for such costs. The letter says the caps on reimbursement under that act are "drastically inadequate in this case."

De Blasio on Monday said he has also spoken with Steven Mnuchin, Trump's choice for Treasury Secretary, about the request. De Blasio said Mnuchin "fully understood that there was a real important discussion to be had on how we deal with reimbursement issues going forward."

The cost of protecting Trump won't necessarily drop significantly once he moves to the White House, since Melania Trump and the couple's 10-year-old son Barron expect to stay at their Trump Tower home in midtown Manhattan until at least the end of the school year.

Donald Trump has also indicated he plans to return home regularly, especially while his wife and child are still there.

It's unclear how the city and the federal government will approach security costs in New York after Trump is president. NYPD Commissioner James O'Neill said a post-inaugural plan "hasn't been firmed up yet."

In his letter to Obama, meanwhile, de Blasio said the city expects an "ongoing obligation" to provide Trump and his family security, "which will require corresponding expenditure for which the city will seek reimbursement."

At a press conference in November, de Blasio said the city would need help with the security costs, particularly police overtime.

"This is a very substantial undertaking. It will take substantial resources," he said at the time. "We will begin the conversation with the federal government shortly on reimbursement for the NYPD for some of the costs that we are incurring."

While primary responsibility for the protection of the president, or president-elect, rests with the Secret Service, local law enforcement is charged with assisting them, particularly in controlling movements of the general public.

Every president is required to have local law enforcement protection when they return home during their tenures, but the cost associated with Trump are particularly expensive, given Trump Tower's immensely high-profile location.