Government has no love for billboard-sized ‘I love NY’ signs, says they’re illegal 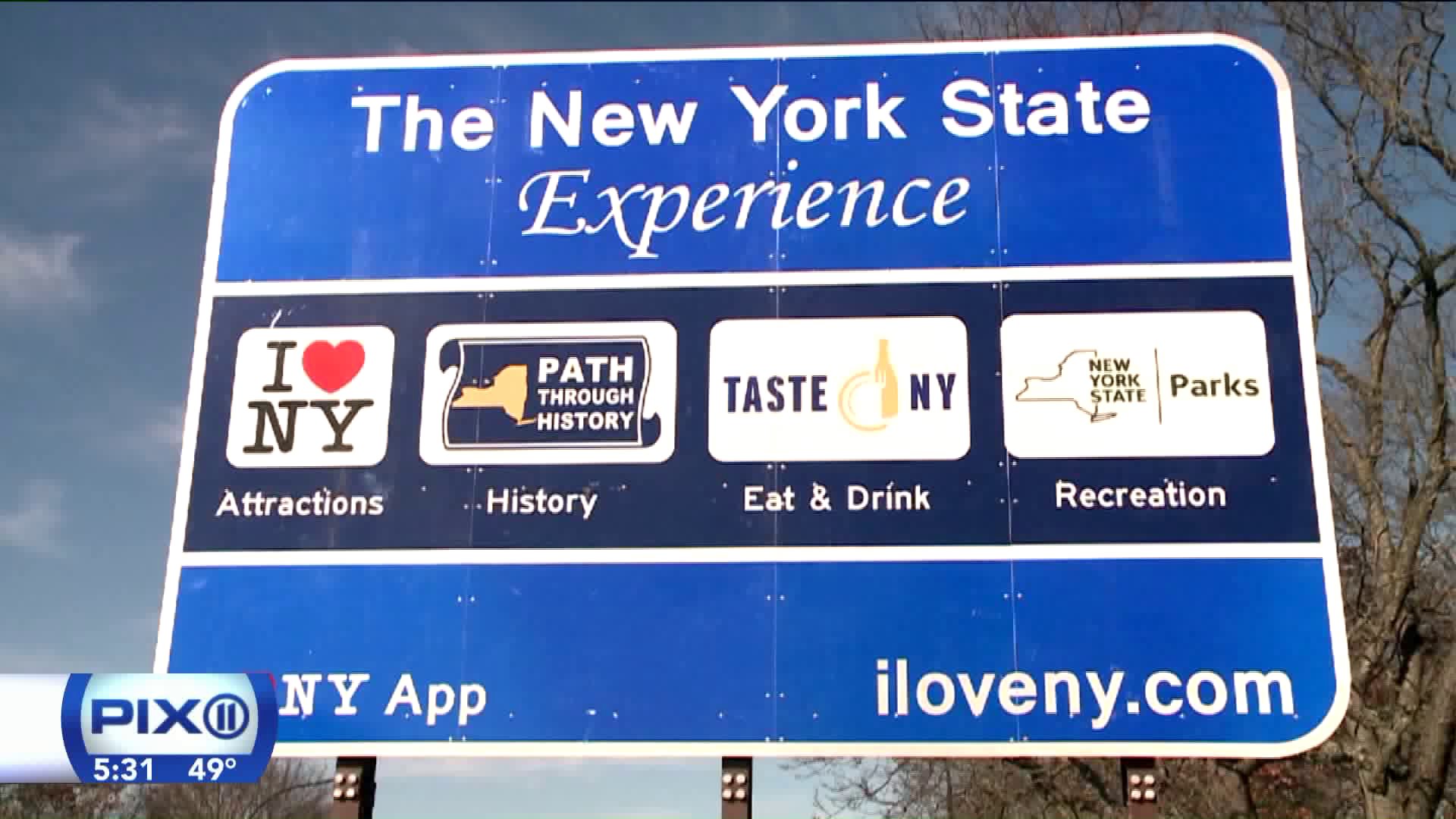 NEW YORK — The Federal government is showing no love for New York state's big blue signs with the trademark slogan "I Love New York," saying they are illegal and a huge distraction to drivers on roads.

You see them everywhere on the roads and they advertise all New York state has to offer to tourists.

But according to the federal government, the signs are illegal. Officials say they're too large, aren't in compliance with signage rules and cause a dangerous distraction to drivers.

"The ugly signs are a dangerous distraction. Looking at a sign and trying to take in these signs and all the information can take up to 7-10 seconds," Hempstead Supervisor Anthony Santino said Friday.

Federal officials say the signs should never have been put up in the first place and claim the Cuomo Administration was defiant and rushed to install them over the summer.

Santino blasted the state for putting them up.

"There is absolutely no discernible benefit to these signs. The signs are pointless, they offer no specific information or direction to local attractions, restaurants, historical sites or anything else of value," Santino said.

Billboard-like in size, critics argue the signs are crammed with words. Some drivers told PIX11 News they could do without the signs.

"They definitely are a distraction at this point. When you do give it a second look, I'm passing by, what do they say? They're a distraction, they're ugly, take them down," driver Kiran Dhillon from Richmond Hill, Queens, said.

Others, however, say it's an unnecessary controversy.

"It seems silly, there are bigger things to be fighting about and these signs I've seen them but they're not that distracting," Bobby Manu, of Huntington, said.

Almost 150 signs have popped up on Long Island roadways alone. Federal officials say the state needs to take them down, face a fine, or they will even withhold federal funds for highway and bridge projects.

"I don't know who the genius is that conceived the idea of placing these disgusting billboards not one but 5 in a row on our beautiful scenic parkways," Gary Hudes, Hempstead Council Member, said.

Santino says the $1.76 million that were allegedly used to create the signs could have been better spent on road repairs. Santino is also angered the jobs weren't kept local. The contract to make the more than 500 signs was outsourced to a company in Arkansas.

State officials contend the billboards are vital to the state’s tourism industry.

“Grandstanding aside, the facts are these signs are a key part of the hugely successful I Love NY program to promote the state’s multi-billion dollar tourism industry. Last year, tourism brought in $100 billion in economic activity, $8 billion in state and local tax revenue and more than 894,000 jobs. This issue has been discussed for years and involves the interpretation of rules for directional signage versus informational signage, and whether or not an email address can be posted. This isn't high crime, but minor disagreements that ‎we look forward to meeting with the feds in order to resolve.”