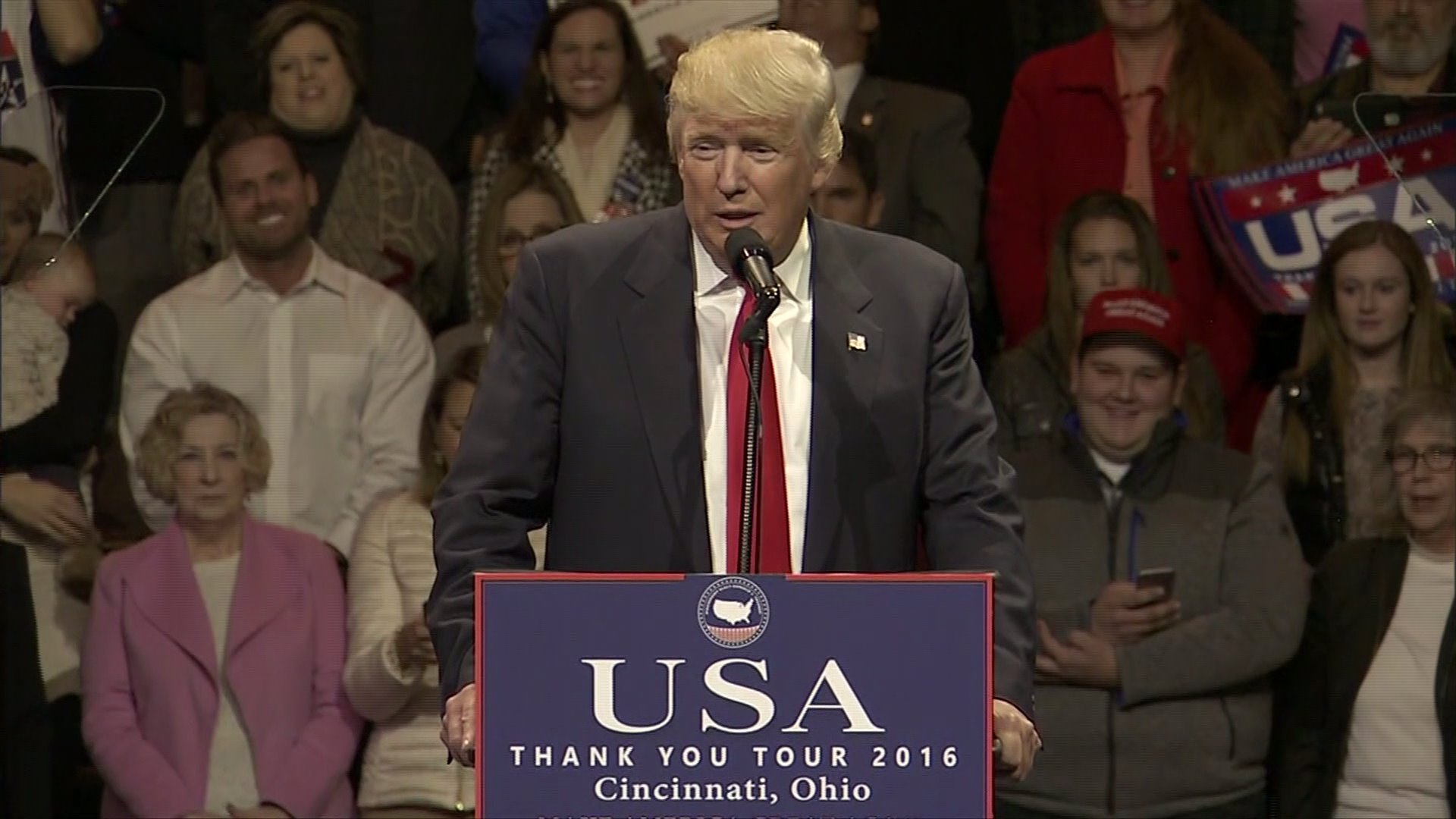 OHIO -- President-elect Donald Trump will nominate retired Marine Gen. James Mattis as his secretary of defense, he announced Thursday in Cincinnati at the beginning of his post-election tour.

"We are going to appoint 'Mad Dog' Mattis as our secretary of defense. But we're not announcing it until Monday so don't tell anybody," Trump said at his rally, adding later, "They say he's the closest thing to Gen. George Patton that we have and it's about time."

The retired four-star general, known as "Mad Dog," was lauded for his leadership of Marines in the 2004 Battle of Falluja in Iraq -- one of the bloodiest of the war.

But he attracted controversy in 2005 when he said "it's fun to shoot some people" while addressing service members in San Diego.

Mattis' selection could put him in position to temper both Flynn and Joseph Dunford, the chairman of the Joint Chiefs of Staff and an appointee of President Barack Obama -- whose generals Trump has said he distrusts.

Mattis has already proven to have the President-elect's ear. After meeting at Trump's New Jersey golf club last month, Trump said Mattis gave him a new perspective on waterboarding, a torture tool he has pledged to reinstate.

"General Mattis is a strong, highly dignified man. I met with him at length and I asked him that question. I said, 'What do you think of waterboarding?'" Trump told The New York Times. "He said -- I was surprised -- he said, 'I've never found it to be useful.' He said,

'I've always found, give me a pack of cigarettes and a couple of beers and I do better with that than I do with torture.'"

"I'm not saying it changed my mind. Look, we have people that are chopping off heads and drowning people in steel cages and we're not allowed to waterboard," Trump said. But I'll tell you what, I was impressed by that answer."

Mattis would also need a waiver from Congress in order to be confirmed. A decades-old legal statute bars service members from quickly entering civilian positions, which would otherwise prevent Mattis from being eligible for the job.

The ranking Democrat on the Senate Armed Services Committee subcommittee on personnel, Sen. Kirsten Gillibrand of New York issued a statement Thursday night that she'll oppose approving such a waiver, saying, "Civilian control of our military is a fundamental principle of American democracy, and I will not vote for an exception to this rule."

Rep. Adam Schiff, a ranking member of the House Intelligence Commmittee, told CNN's Jim Sciutto Wednesday, however, that the regulation would pose as more of an inconvenience for Mattis's confirmation, rather than barring him from the job.

"It will certainly be an issue. I don't ultimately think it will be a bar because I think he is so well thought of that he can overcome peoples' reservations of that," Schiff said. "My guess is because his reputation is so strong and, frankly, because there's enough concern among Democrats about some of the President-elect's other choices, they'll be a desire to amend the statute if that's what' necessary and I believe it would be necessary.

In Mattis, Trump has a nominee who was held in high regard throughout the ranks of the Marine Corps during his 44 years of service. A seasoned combat commander, he led a task force into southern Afghanistan in 2001 and a Marine division at the time of the Iraq invasion in 2003. He was later promoted to run US Central Command in 2010 -- a post that gave him command responsibility for all US forces in the Middle East. He also was an outspoken critic of the Iran nuclear deal. He also has served as a commander of a major NATO strategic command, Allied Command Transformation, in Norfolk, Virginia.

Mattis butted heads with the Obama administration as head of US Central Command from 2010 to 2013 over the need to prepare for potential conflict with Iran.

He was a critic of the Iran nuclear deal and said at the Aspen Security Forum in 2013, when asked about his top concerns as head of US Central Command, "Iran, Iran, Iran."

Why is Mattis called "Mad Dog"?

Mattis earned the nickname "Mad Dog" after leading combat troops into the Persian Gulf War in 1991, as well as Afghanistan and Iraq in the early 2000s.

He was called "Mad Dog" after the 2004 battle of Fallujah in Iraq, where he led British and American troops against Iraqi insurgents. He has backed up the nickname with off-color remarks, such as his 2005 declaration in a panel discussion about the Taliban that "it's fun to shoot people."

He is also a bachelor and an avid reader and student of military history, earning a second nickname: "The Warrior Monk."