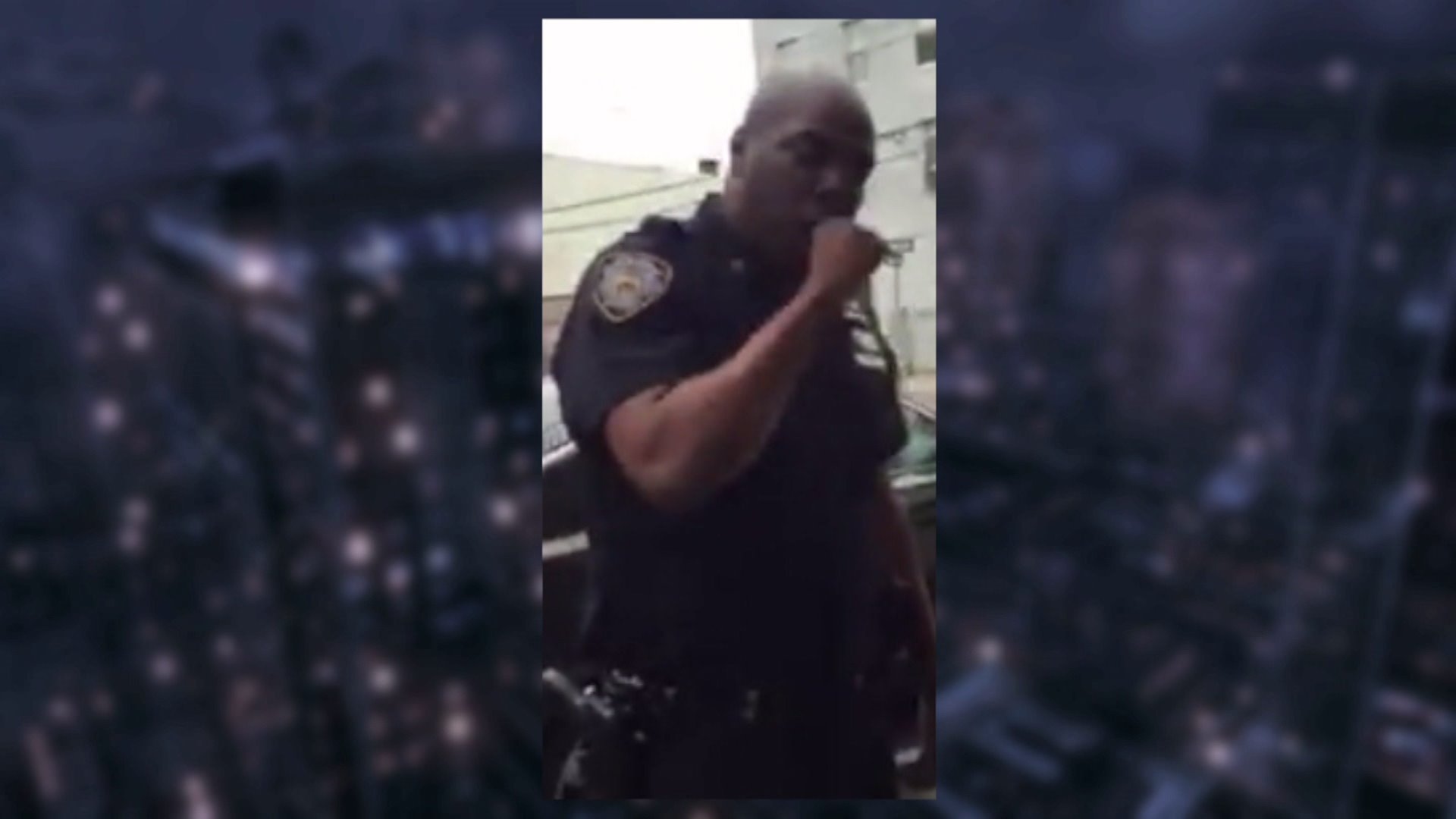 MORRISANIA, The Bronx — It's a bad sight in any case when people shoot craps on your street; but when one of those people is a cop, it's another, far worse thing entirely.

Eyewitnesses captured this happening on video in the streets of the Bronx. The circumstances under which it happened may indicate a much larger pattern of abuse by the officer who PIX11 News has learned, was recently promoted to the rank of detective in the NYPD.

The video would seem unbelievable, except that it's quite real.

"If you ace out right now, you gotta let him go," say the young men on the sidewalk to uniformed officer in the video, who's been identified by witnesses as Detective David Terrell.

In the video, he blows on the dice for good luck, and throws them. He throws a second time as well, but before doing so, kisses the dice. It's clearly not his first time playing. His service weapon is also in clear view as well while he plays an illegal game, allegedly with minors.

Their taunt, "If you ace out right now, you gotta let him go" refers to the person in the back seat of Terrell's police cruiser, which is visible in the video about 20 feet behind the policeman. He and the young men in the craps game are gambling over the prisoner's fate.

It's not clear that the person under arrest went free. At the same time, based on Terrell's reputation, it's hard to know whether the community is better off or not with the suspect in custody.

"This detective is giving every good cop a bad name," said private investigator Manuel Gomez. He'd been given the video by one of many people in this neighborhood who are concerned about Detective Terrell's harassment of them.

Gomez is himself a former NYPD officer and a combat veteran intelligence officer in the U.S. Army.

Gomez pointed out that Terrell's reputation for harassment directly affected this story.

While PIX11 News was interviewing Gomez, a siren went off in an unmarked police sedan.

"That's him!" Gomez exclaimed, as the black car drove past.

Private detective Gomez and NYPD Detective Terrell are not strangers to each other.

There are 12 lawsuits pending against Terrell related to wrongful arrests for a variety of crimes, including homicide and attempted homicide. Eleven of those lawsuits are being handled by Gomez, and most of those involve plaintiffs' lawyer John Scola.

Their client Pedro Hernandez has been in the news before.

In a PIX11 exclusive report last August, Hernandez was seen in a surveillance video getting severely beaten by a counselor at a court-ordered juvenile counseling facility.

The reason Hernandez, who is now considered an adult under the law, was at the facility in the first place was that he was under arrest at the time in a case handled by Terrell. The charges were eventually dropped.

But now, the craps-shooting detective has arrested Hernandez again. This time, it's for a shooting.

There were at least a half dozen eyewitnesses to the shooting, including one who anonymously described the shooter to PIX11 News.

"He didn't look nothing like [Pedro]," the eyewitness said. The shooting victim has even gone on record saying that Hernandez is not the person who shot him.

However, because the detective who was caught on camera committing a number of crimes has accused Hernandez of carrying out the shooting, Hernandez is in jail on Rikers Island, unable to post $250,000 bail.

It's a situation that's left his lawyer and private investigator in disbelief. Regarding Detective Terrell, Hernandez's attorney, John Scola said "He's actually terrorizing the community, still. We get multiple calls [about Hernandez] and the [NYPD] still haven't done anything."

"What blows my mind," said Gomez, the private investigator, is why the department is "not taking this liability off the street?"

The NYPD told PIX11 in a statement: "The matter is under internal review."