‘We will not comply’: NYC mayor defies potential Trump policies in campaign-like speech 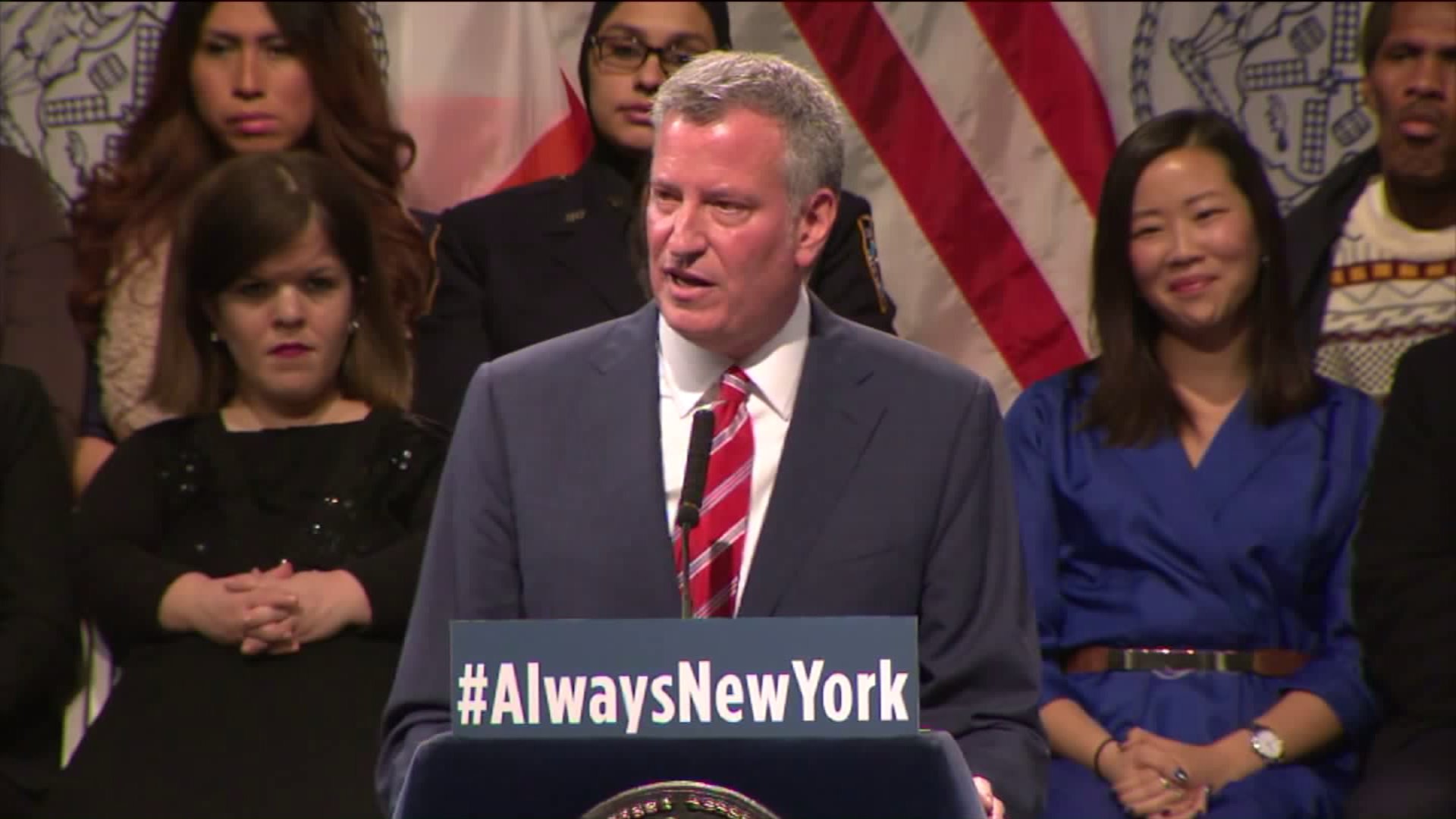 ASTOR PLACE, Manhattan -- It was a major address to let it be known that New York City is a safe haven from what Mayor Bill De Blasio described as the most fearful promises from the campaign of now President-elect Donald J. Trump.

Still, the mayor's speech at The Cooper Union was not above criticism, particularly among political analysts, who said it had the ring of a re-election campaign platform.

From the Muslim police captain's family leading The Pledge of Allegiance to the Jewish, Muslim and openly gay Christian FDNY chaplains giving the invocation, the event in the historic Great Hall of Cooper Union was designed to send a message of unity in diversity.

Mayor de Blasio called it a necessary response to many campaign claims made by Donald Trump.

"We worry about a nation that was meant to be inclusionary becoming exclusionary," he told the standing-room-only audience of invited elected officials, city employees and community activists.

Through a series of declarations, the mayor sought to strongly put fears to rest.

"If all Muslims are required required to register," he exclaimed from the podium, "we will take legal action to block it."

Thunderous applause and cheers followed that statement, as they also did when he declared, "If the federal government wants our police officers to tear immigrant families apart, we will refuse to do it."

The loudest reaction from the audience came when the mayor announced, "If the Justice Department orders local police to resume stop and frisk, we will not comply."

The choice of venue for this major address was not lost on the audience, by any means. The stage of Cooper Union's Great Hall is where the presidential candidates Abraham Lincoln and Barack Obama, among many other political celebrities, have given important speeches.

Similarly, the mayor seemed to, at the very least, seek to make a landmark speech in what is literally a landmark of history. At most, the event had the feel of a well-crafted rough draft of de Blasio's campaign themes for his re-election next year.

"Bill de Blasio is a great politician," said longtime political analyst and campaign consultant Hank Sheinkopf. "He understands how to get elected."

Sheinkopf went on to say that the mayor is a very good judge of which way "the political winds are blowing," and that "the wind is blowing against Donald Trump in New York."

Sheinkopf said that the mayor, while trying to allay fears of a Trump Administration, is also saying, "'Ain't I the greatest? Keep me in office.'"

However, with the audience, the mayor's address hit the mark.

"We are strong," said Maxed A. Uddin, a city-employed Bengali translator who said she's proud to wear her hijab, but that she's also been worried since Trump's election. "At least I don't need to cry anymore for [being] Muslim."

Pastor Adlerette Kebreau, who said that she'd worked on the mayor's first campaign, said that his speech promoting diversity was like a really good sermon because it "brings healing to" the community.

"[You need to] minister healing to them," the pastor added. "That, I feel that this morning that he did."