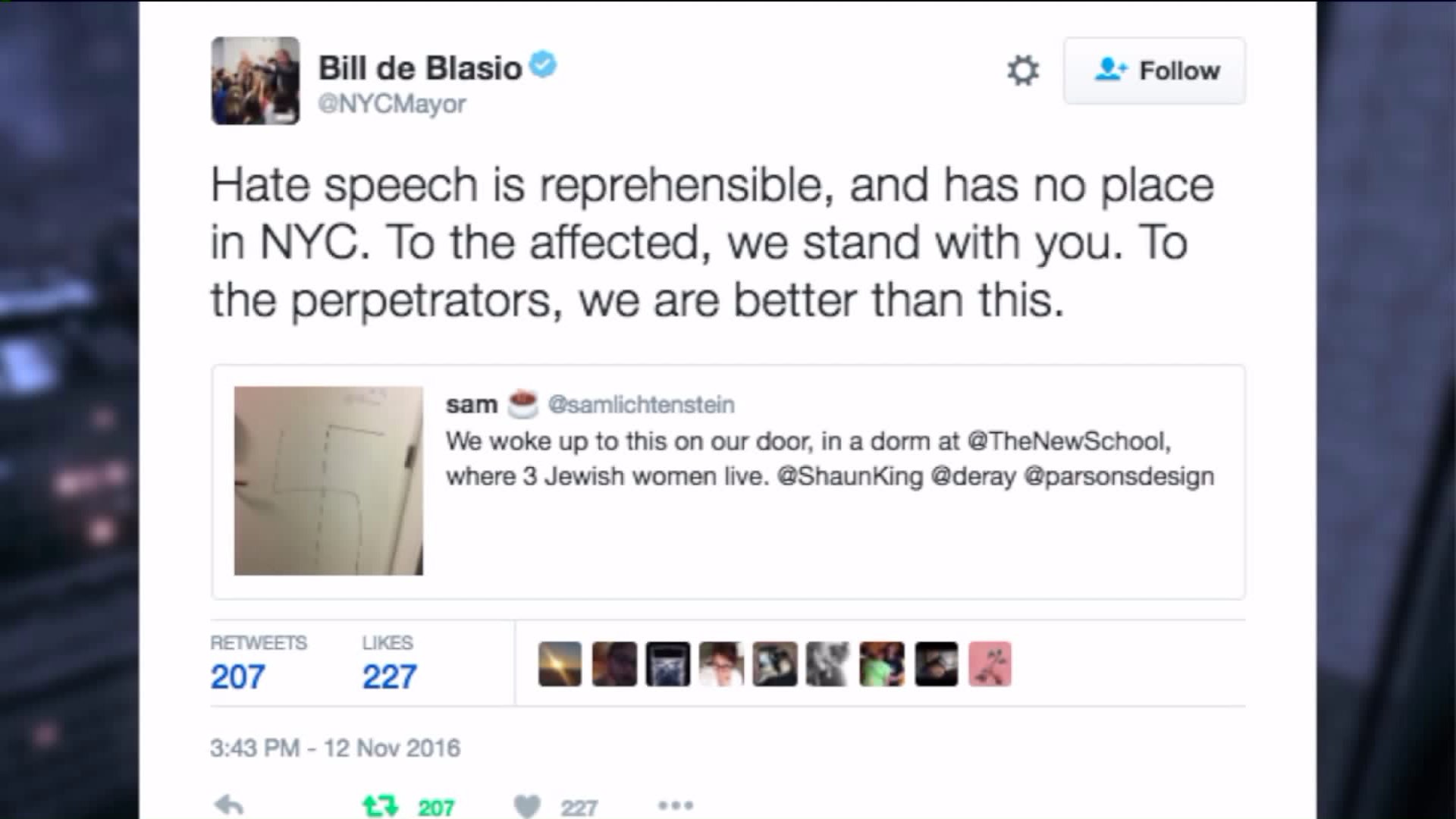 NEW YORK — A New School student said she woke up Saturday morning to find a swastika drawn on the door of her dorm room where she and three Jewish students live.

The student posted a photo of the racist symbol drawn on her white door on Twitter, receiving hundreds of responses and retweets.

Mayor Bill de Blasio responded to the student's tweet and offered a sharp rebuke to the culprits.

"Hate speech is reprehensible, and has no place in NYC. To the affected, we stand with you. To the perpetrators, we are better than this," de Blasio tweeted Saturday evening.

Hate speech is reprehensible, and has no place in NYC. To the affected, we stand with you. To the perpetrators, we are better than this. https://t.co/8J4JU56yti

The New School also said on Twitter: "There is a difference between free speech and hate speech — one invites discussion, the other instigates fear. We do not condone hate speech."

"I have just learned of the defacement of four dormitory doors on our campus with a symbol intended to threaten and express hatred toward some of our students because of their identities. Our community standards are very strong and hate crimes are unacceptable at The New School. The New School is committed to tolerance, respect, and diversity. Any form of expression that denigrates members of our community based on their race, ethnicity, religion, sexual or gender identity, or political beliefs is completely abhorrent and antithetical to our core values. We take any such instance seriously, investigate swiftly, and take appropriate action to ensure the security and safety of all our students."

The incident joins the string of apparent hate crimes that have been reported nationwide since Donald Trump was elected as president on Tuesday.

Reverend Al Sharpton is tapping into the anger felt by some New Yorkers who are worried about what the impending Trump presidency would mean for them.

"You don’t know nothing," a fired up Reverend Al Sharpton said of Trump on Saturday.

Nearly 2,000 people have signed up online for a buddy system, aimed at accompanying Muslims, people of color and members of the LGBTQ community who fear riding a train or walking home late at night and being attacked.