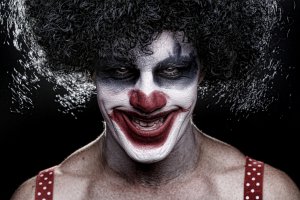 Police received a report of a person dressed in a clown costume in North Babylon and group of people dressed as clowns were seen jumping in front of cars in Brentwood Wednesday night, according to the report.

One Twitter user reported seeing the clowns in Brentwood and warned others of their presence on social media.

"Everyone please be careful driving tonight in Brentwood," she wrote. "I just witnessed 3 men dressed in clown suits on Commack Rd. Coming towards my car."

Everyone please be careful driving tonight in Brentwood. I just witnessed 3 men dressed in clown suits on Commack Rd. Coming towards my car.

Earlier this week, police in New Jersey received four reports. Three clowns emerged in Walter Park and chased a boy on Sunday. Then on Monday, a person dressed as clown was walking in Hudson Street in Warren County and another donning a jester outfit with a sword-like item was seen running after a boy. A truck with clowns hanging out the window was seen driving down Mercer Street, police said.

Nationally, there have been reports of creepy clown sightings in South Carolina, Alabama, Georgia, Maryland, North Carolina and Pennsylvania.