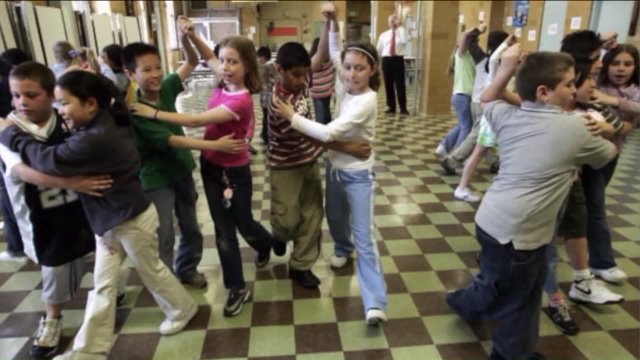 What better way to celebrate National Ballroom Dance Week than with some of the best dancers in New York City?

The dancers happen to be part of a program called Dancing Classrooms. It was founded by Pierre Dulaine in 1994 as a not-for-profit project of the American Ballroom Theater Company in NYC. Dancing Classrooms is an arts program, teaching ballroom dancing to the upper elementary and middle school students of participating schools throughout the five boroughs with the goal of cultivating  essential life skills in children through the practice of social dance.

Many developmental experts, celebrities, and performers of the arts agree and have been campaigning for the important role the arts play in the social and emotional development of children.  Through studies, ballroom dancing has proven to change many young people's lives -- grades of students have risen, bullying decreased and the school culture changed for the better.

To date, Dancing Classrooms has instructed over 400,000 children in 31 cities around the world!

This program has been so impactful that Mr. Dulaine's journey into the NYC public schools system was depicted in the feature film, “Take the Lead,” starring Antonio Bandera as Dulaine. This year marks the 10th anniversary of the film.