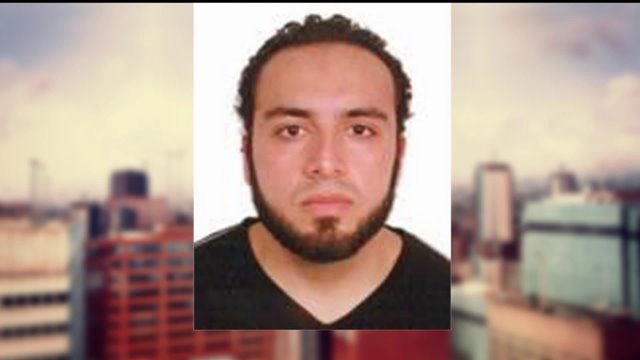 NEW YORK — A New Jersey man, considered "armed and dangerous," who is wanted in connection with explosions in Seaside Park and Chelsea over the weekend, the latter resulting in 29 people being injured, was taken into custody Monday morning, authorities said.

Rahami was nabbed after a police-involved shooting in Linden, N.J. Video from the scene showed him being loaded on a stretcher into an ambulance, bloodied on his right arm but conscious and alert.

Multiple photos of Rahami have been released:

An emergency alert was sent to cellphones in the search area shortly before 8 a.m. asking anyone who spots the man to call 911.

"The important thing is to get this individual quickly and to continue to be strong and vigilant," NYC Mayor Bill de Blasio tweeted.

The mayor said he did not want to make assumptions regarding Rahami's status as a person of interest in the investigation.

“This is the person we're most interested in this morning," de Blasio said.

Rahami is of Afghan decent and his last known address was in Elizabeth, New Jersey, according to the FBI. The wanted man is a naturalized U.S. citizen, according to de Blasio.

Rahami was believed to be driving a 2003 Blue Honda Civic with New Jersey registration D63EYB, according to New Jersey State Police.

He is considered "armed and dangerous," the FBI warned.

Though Rahami is in custody, countless questions remain as investigators -- local and federal -- continue to probe the bombings.

An emergency notification was sent to people's cellphones on Sept. 19, 2016, in the FBI's search for Ahmad Khan Rahami.

Anyone with information is asked to contact the FBI's Toll-Free Tipline at 1-800-CALL-FBI (1-800-225-5324), your local FBI office, or the nearest American Embassy or Consulate.

There are signs of a possible terror cell in New York and New Jersey, law enforcement told CNN less than an hour before Rahami was identified as being wanted for questioning.

A raid is also underway at an apartment in Elizabeth, Mayor Chris Bollwage confirmed shortly before Rahami was identified.

A father and son live at the Elizabeth home above a chicken restaurant, Bollwage said.

Locals said the duo owned the restaurant, and described the father and son as very friendly.

Officials have not commented if Rahami is connected to the Elizabeth raid, and when shown his picture, three locals who frequent the restaurant said they did not recognize the wanted man.