READ IT: Manifesto by person claiming responsibility for Chelsea attack is determined not to be credible 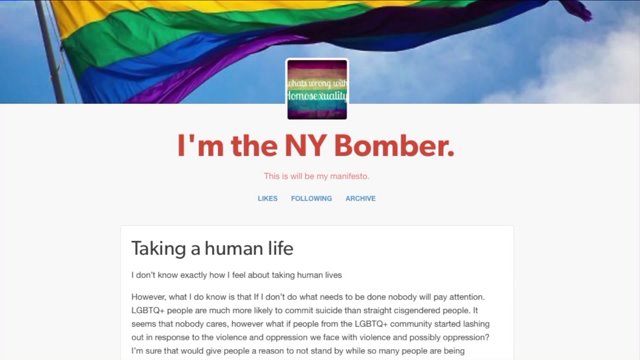 NEW YORK  — An online manifesto written by a person claiming responsibility for an explosion in Chelsea that injured 29 people has been determined not to be credible, multiple sources told PIX11 hours after it was first discovered on Sunday.

The writer said he or she detonated an explosion in Chelsea Saturday night that injured 29 people.

Early Sunday afternoon a high-ranking police official said investigators were aware of the blog and looking into its validity.

Hours later, officials with the NYPD and mayor's office said the manifesto was determined not to be credible and had been linked to a person in North Carolina.

The following is the complete manifesto from the individual claiming responsibility for Saturday night's attack.

The blog was titled, "I'm the NY bomber. This will be my manifesto," and contained two entries before it was taken off Tumblr's website Sunday afternoon.

Taking a human life
I don’t know exactly how I feel about taking human lives
However, what I do know is that If I don’t do what needs to be done nobody will pay attention. LGBTQ+ people are much more likely to commit suicide than straight cisgendered people. It seems that nobody cares, however what if people from the LGBTQ+ community started lashing out in response to the violence and oppression we face with violence and possibly oppression? I’m sure that would give people a reason to not stand by while so many people are being oppressed. I suppose I’m just going to have to move forward knowing that what I am doing had a purpose and will in fact make a difference. I’ll keep you all posted.

Manufacturing Test Explosives
Hi.
You probably have all seen the news by now,
the explosives detonated in New York City, that was me. Those were just some tests, I know where I have made errors and I will not make the same mistake next time.
I did it because I cannot stand society.
I cannot live in a world where homosexuals like myself as well as the rest of the LGBTQ+ community are looked down upon by society.
It is 2016 and we are still being viewed as mentally ill, sinners, attention seekers, and just plain weirdos in general. I am not going to stand by while under classed and underprivileged people are oppressed. I am not going to stand by while there is inequality in my country such as the racism being seen in white police officers all over the country. I am not going to live in a country where it is OK to have a misogynist, xenophobic, racist Islamophobic, republican candidate running for President of The United States! That’s implying that republicans in general should even be taken seriously as they are all cisgendered privileged white people.
This is not the end, this is just the beginning. I will be remembered. I will make a difference. I will eliminate my targets before it is too late.

Click here for more information on the police investigation into the manifesto.