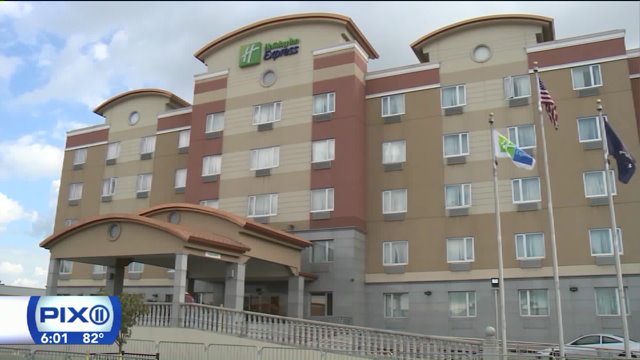 NEW YORK — PIX 11 News has learned that a state senator is asking the district attorney to investigate Mayor Bill de Blasio, the Department of Homeless Services and the owner of the Holiday Inn Express in Maspeth, Queens, to ensure there is "no illegal activity taking place" regarding the hotel that is set to begin housing homeless families in the near future.

A Holiday Inn Express in Maspeth, Queens that is expected to be turned into a hotel for the homeless is pictured, along with a letter from a state senator to the district attorney on Sept. 7, 2016, requesting a federal investigation into it owner Harshad Patel, Mayor Bill de Blasio, and the Department of Homeless Services. (PIX11)

The Holiday Inn Express, owned by Harshad Patel - a man who was involved in a 2011 bribery scandal - is being considered for use as a homeless shelter. State Sen. Tony Avella (D-Queens) has asked U.S. Southern District Attorney Preet Bharara to investigate the issue.

"Mr. Patel openly admitted to paying a former state elected official more than $20,000 to get that official to effect a zoning change in his favor," Avella wrote to Bharara in a letter Tuesday.

"I find it shocking that Mayor Bill de Blasio and the New York City Department of Homeless Services would seek to enter into an agreement with an individual who has openly admitted to what appears to be a lengthy bribery scheme seeking action from a city agency for a prior hotel property he owned."

Avella is unsure how the Holiday Inn has been so rapidly transformed into a homeless hotel, he said. The contract shouldn't have gotten so far down the line without someone picking up on Patel's past.

"It's absolutely shocking that the mayor and city would agree into contract with this individual," Avella told PIX11 by phone Wednesday.

The state senator is also asking Bharara to probe other hotels owned by Patel.

It should be noted that Bharara has cemented his legacy by prosecuting Wall Street executives and public officials involved in corruption.  Additionally, the fed have an active investigation pertaining to potential public corruption within the de Blasio administration and City Hall.

Avella chairs a homeless crisis task force in Albany that was formed last year. He has been a constant critic of the De Blasio administration in their handling of the homeless crisis as evidenced in PIX 11 News’ series of reports "No Place To Call Home."