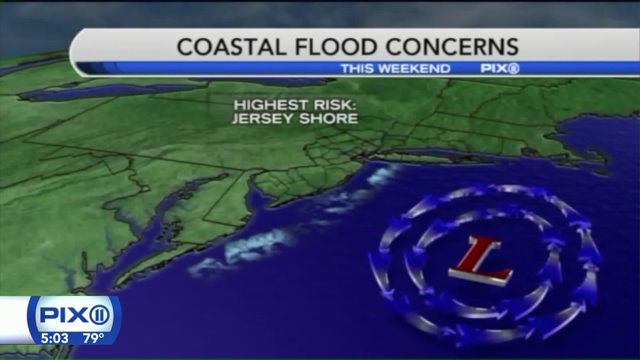 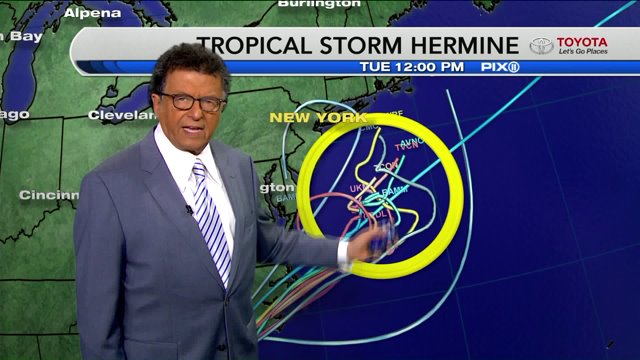 NEW YORK — Tropical Storm Hermine hit the Carolinas Friday evening as it continued on its path to New York City.

Watches have been extended from parts of New Jersey north through Connecticut after Hermine touched down prompting New York officials to close city beaches Sunday, and possibly into Labor day.

Hermine — the first hurricane to hit Florida in more than a decade — weakened from hurricane to tropical storm status within hours on Friday, and is moving in a northeasterly direction.

Projected storm surges of up to 12 feet menaced Florida's coastline and expected rainfall up to 10 inches carried the danger of flooding through the storm's path, the Associated Press reports. This includes Tallahassee, which hadn't been hit by a hurricane since Kate in 1985.

The tropical storm is expected to continue moving up the Eastern Seaboard with the potential for drenching rain and deadly flooding before stalling offshore near the tri-state area this weekend and lingering for several days, causing rough surf and high seas.

Impacts are expected to be felt "well away from" the center of the storm, and the watch warns of winds of 39 to 73 mph, according to the National Weather Service.

A Tropical Storm Watch is now in effect. Stay tuned to https://t.co/xrkkuob9Wl for the latest track on #Hermine pic.twitter.com/OXFZWlKVFP

Hermine is forecast to linger longer than other storms, continuing to have a “real impact” on NYC through Wednesday, Mayor Bill de Blasio said at an afternoon press conference Friday.

"Extremely dangerous" rip tides not seen in 10 to 15 years are possible, the National Weather Service told the mayor.

The looming threat prompted the closure of all city beaches Sunday, and hopeful visitors should check media reports to see if beaches are closed Monday and Tuesday as well.

People are allowed to visit beaches, but should not "even put your foot in the water," de Blasio said, adding that, “once the rip tide grabs you, you cannot get out in many cases.”

“This storm could be very dangerous, especially for those in coastal communities,” de Blasio warned.

In New Jersey, those living in and around Fairfield, southern New Haven, southern Middlesex, Hudson and eastern Essex could see dangers as well.

Although Hermine is not expected to again become a hurricane, or be comparable to 2012's Hurricane Sandy,  de Blasio advised anyone living in coastal communities to prepare a “go bag” in case they need to flee.

“I don’t want anyone to take this one lightly. … There are some elements of this storm that are very, very troubling,”  de Blasio said.

In addition to "go bags," the Red Cross recommends people coordinate an emergency plan with everyone in their households. For more information, you can visit redcross.org.

Pedestrians and motorists are also advised to seek shelter if winds pick up, as projectiles can cause serious injuries and even death, de Blasio said.

Department of Building employees have been advised to secure construction sites, and homeowners are asked to do the same.

You can report downed lines, outages and check service restoration estimates at conEd.com or by calling 800-752-6633. You can also sign up for text alerts at coned.com/mobileapp/

Bridge restrictions are being considered, but are not yet in effect, de Blasio said Friday afternoon.

And Monday's J'ouvert festival has not been canceled.

People should continuously check weather reports for updates, and to see if events are canceled or roads are closed.