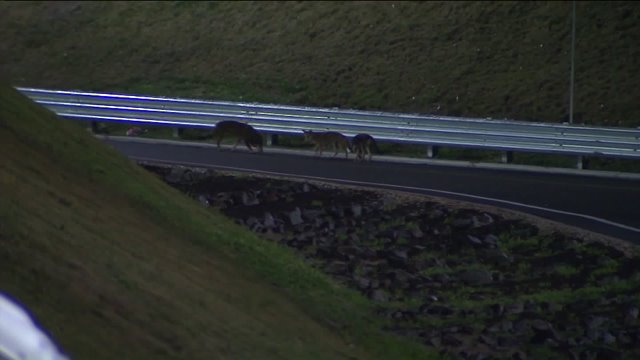 EAST ELMHURST, Queens — A group of coyotes was spotted lurking around a temporary employee parking lot set up because of construction at LaGuardia Airport Thursday.

A PIX11 reporter spotted the animals in the roadway of the parking lot near 45th Street and Berrian Boulevard in Astoria.

Employees dodge the critters every night.

“As you’re coming through they’re waiting for you to say good night,” said one airport employee.

The Port Authority built the parking lot in 2015 atop Ingraham’s Mountain, a man-made “mountain” built excavated materials from construction of the third tube of the Lincoln Tunnel, according to documents obtained by PIX11 News. It’s situated about 0.2 miles west of the airport and bounded by the Rikers Island Bridge.

A 2013 report took into consideration, the disturbance to wildlife take refuge atop Ingrham’s Mountain.

“Common species of bats are expected to use the Ingraham’s Mountain site,” the report states.

The report failed to mention coyotes which have been there for the past three years, according to Frank Vincenti, a wildlife advocate who watches the coyotes most nights.

“It’s a slight disturbance at a critical time of the year for them but they’ve adapted to it and they’re thriving,” Vncenti said.

Construction at LaGuardia Airport is expected to be complete by 2018.