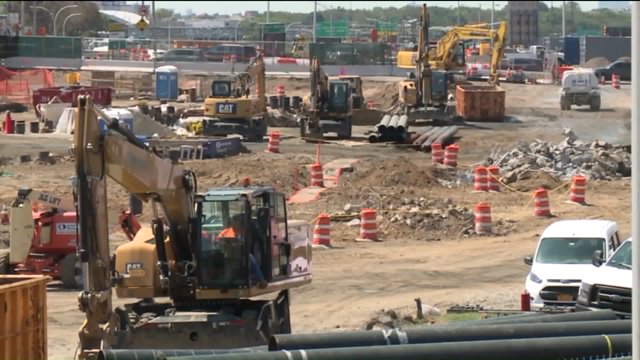 A $5.3 billion project to overhaul a terminal at the airport has travelers bailing from their cabs, luggage in hand, to walk to the airport.

"It was horrendous," said livery cab driver Cecil Craffy. "It’s the worst I’ve ever seen anywhere in the city. It took me an hour plus from the Grand Central to the corner and the customer had to come out of the car to walk to reach there."

The Port Authority's new temporary road ways, which are on the way this fall, will alleviate the worst of the traffic problems. But in the meantime, trips to the airport are taking a lot of time.

"The construction just kicked into high gear, so it’s going to be some inconvenience," said livery cab driver Niki Dyett. "It’ll be some months before they finally get it under control."

Port Authority also says they are putting in a new parking lot, expected to be ready by 2018.

In the meantime, the entire construction project has one driver scratching his head.

"How are you going to dig up the whole airport at the same time? That’s incredibly stupid. Do section by section."