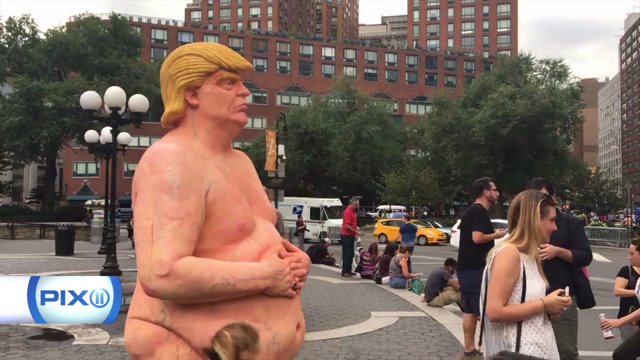 The statue quickly drew a large crowd of gawkers who snapped pictures and struck poses with the figure. By 1:30 p.m., it had been taken away by crews with the Parks Department.

A plaque at the foot of the statue read, "The emperor has no balls," a nod to Hans Christian Andersen's book "The Emperor's New Clothes" about a pair of weavers who create dressings that are invisible to those who are unfit or incompetent for their position.

Mayor Bill de Blasio was asked about the statue at a news conference Thursday.

"That is a frightening thought," de Blasio said. "When he's wearing clothes I don't like him."

So who erected the bold piece?

At the foot of the statue is a signature: Ginger. Also on Monday a video was posted to YouTube showing how the statue was made.

It’s not the first time the Republican presidential nominee has been depicted in the buff. Earlier this year, artist Illma Gore created a sketch of Trump naked, his right leg hoisted on an unseen ledge as he leans toward the viewer, mouth agape.

WARNING: The video below contains uncensored footage of a naked statue being created.

The group behind the statues, Indecline, posted photos of all five statues on its Instagram.