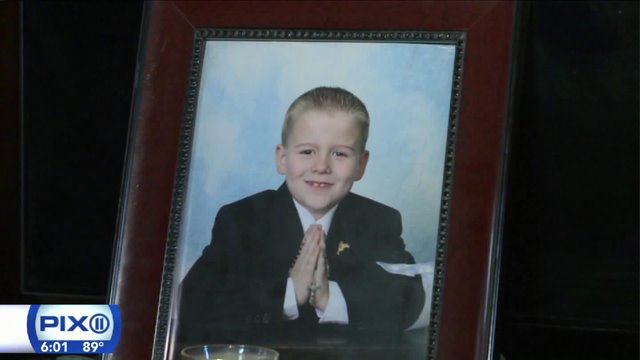 WEST BRIGHTON, Staten Island — An online fundraiser launched with a $10,000 goal to pay funeral expenses for a 13-year-old Staten Island boy who took his own life has raised over $105,000 from more than 2,700 donors in three days.

Funeral services has been scheduled for Monday and Tuesday at Harmon Funeral Home, and on Wednesday at Sacred Heart Roman Catholic Church. The money from the GoFundMe page that is not used for funeral expenses will be donated to efforts to fight bullying and encourage suicide awareness.

The boy wrote a letter last month describing bullying he suffered at Brooklyn's Holy Angels Catholic Academy. His father says in a Facebook Live video that he told school officials about the bullying.

"You have to try harder Danny. Oh, I know, I know, these things will pass. Children can be such horrible creatures," Fitzpatrick said the principal told him during that meeting.

But things didn't pass for the tortured boy, who took to pen and paper as a recourse from his agony after nothing else had worked.

Fitzpatrick wrote the letter in July detailing his bullying ordeal. He intended to send it to the school to hold the teachers and principal accountable for allowing the continuous attacks to happen.

"I am writing this letter to tell about my experience in Holy Angels Catholic Academy," it began.

"At first it was good...lots of friends, good grades and great life. But I moved and went back but it was different. My old friends changed they didn't talk to me they didn't even like me."

Fitzpatrick said when he started sixth grade, a boy who was once his friend began bullying him. Then four other students joined in and "they did it constantly until I went into a fight."

"But they continued. I gave up. The teachers either they didn't do anything! Not get them in trouble even though they did trouble, I got in trouble instead," Fitzpatrick wrote in the letter.

He said eventually one teacher did step up to help, but "it didn't last long."

"I wanted to get out. I begged and pleaded, eventually I did get, I failed, but I didn't care, I was out, that's all [I] wanted," he wrote at the end.

The school and the Archdiocese of New York didn't immediately return requests for comment.