Backstage on Broadway: Felicia Velasco shows how she wrangles the child actors of ‘On Your Feet!’ 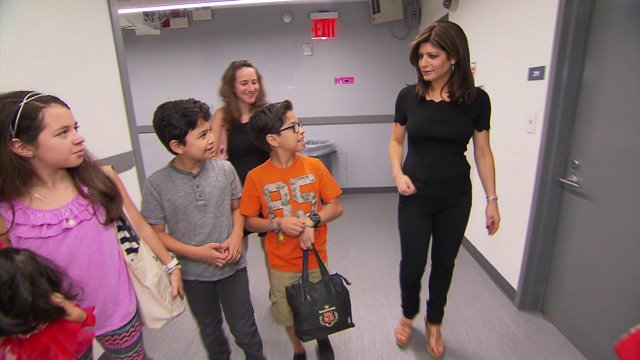 In this week`s Backstage on Broadway, Tamsen Fadal meets the woman keeping the kids of `On Your Feet!` on schedule

Life on Broadway comes with quite the responsibility and for theater’s youngest performers, it takes a special person to help them navigate it all.

In this week’s Backstage on Broadway, we head over to the musical On Your Feet! to meet the woman making sure everything runs smoothly.

“It’s funny because no one really knows what goes on with us,” Felicia Velasco laughed.

Felicia Velasco is one of theater's unsung heroes, currently working on the Gloria and Emilio Estefen musical On Your Feet!.

“I’m responsible for the child actor and for their well-being," she explained.

Her nonstop responsibilities start the second she meets the kids at the stage door, checks them and takes them to their dressing room.

“First thing I do, is get the mics ready," she showed us. "Kevin is on today so all of his stuff will be set out."

Felicia balances the schedules of four children, getting them to hair and makeup, into their costumes and onstage at the right place and time.

“That’s a lot to remember for you though because you’re remembering for multiple people, how do you keep it all together?" I asked. "It is tough, but I take lots and lots of notes, all through the rehearsal process.”

She grew up in the arts world, her mom was a dancer. But she sort of stumbled into this role back in 2009 while working on West Side Story.

“They needed a sub for that show and they just knew me and they thought oh Felicia would be good at that so they asked me,” Velasco remembered. “I said sure even though in my head I was like, 'okay what now?!'” she laughed.

Seven years and 10 shows later, she still loves every minute.

“The kids make me laugh a lot for the most ridiculous reasons," she said.

“I love her and she’s really funny, she’s the best,” Fabi Aguirre, one of the kids, said.

They goof around, play games and bond over shared interests.

“If Felicia weren’t here what would it be like?" I asked. "[She] basically keeps it together," Eduardo Hernandez and Kevin Tellez agreed.

So it's no surprise they form quite the connection.

"Is that hard thought when a show ends?" I asked. "Yeah, definitely but I still stay in touch with some kids so that's good.”

Felicia's more like a cool aunt and their friend but seeing how good she is with kids, I had to ask...

Until then, she just cherishes getting to be a part of these little ones' lives.

Felicia also told me there are about 15 other full-time child wranglers. They meet up as a group for drinks and of course, talk about their little kiddos.

On Your Feet! is currently playing at the Marquis Theatre.