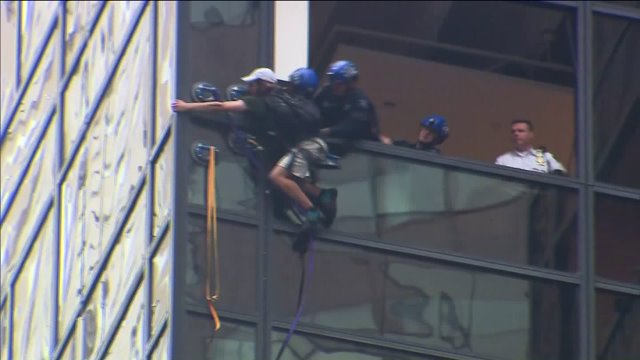 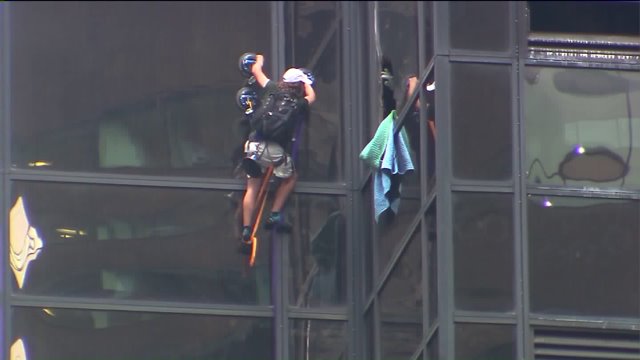 MIDTOWN, Manhattan — A man who used suction cups to scale part of the 58-story Trump Tower in midtown Wednesday afternoon was captured after evading police for nearly three hours.

The climber and instant Internet sensation was pulled through a 21st-floor window around 6:30 p.m. -- hours after the ordeal began. In just a few dramatic minutes, the man went from being suctioned to the side of the glass wall to being pulled, his legs flailing, through the open window and into the safety of awaiting officers.

The crowd below booed as he was taken into custody and then cheered the daredevil for his effort.

Police sources identified the climber as 20-year-old Stephen Rogata from Virginia.  Across social media, the phrase "Steve from Virginia" was trending. The crowd assembled at the tower's base kept chanting "Steve" and "Let's go Steve" in almost unanimous support of his escapade.

A view from inside Trump Tower as a man scales the building using suction cups. (Photo: Hector Castillo)

Police arrived on the scene just before 4 p.m. as the climber slowly made his way up the glass facade on the south side of the building equipped with a contraption involving ropes and suction cups.

Emergency Service workers and NYPD officers removed an entire pane of window glass just a few stories above the man as they waited for him to climb towards them.

NYPD officers were also stationed in a nearby window washer scaffolding.

The man reportedly carried on conversation with officers as they attempt to find out his intentions. An airbag was positioned at the base of the building in case the climber jumped or fell.

Trump Tower is located at East 56th Street. The street in front the building was closed off as hundreds of spectators gathered to watch the climber.

During the ordeal, a video surfaced on YouTube titled "Message to Mr. Trump (why I climbed your tower)" that shows a man explaining why he decided to scale the tower. The authenticity of the video has not been confirmed, but was widely shared Wednesday. He said in the video that he wanted to get Trump's attention, and that he supports him.

At a press conference following the ordeal, NYPD confirmed the climber is from Virginia and that his sole purpose of the climb was to meet Donald Trump, not to hurt anyone.

Great job today by the NYPD in protecting the people and saving the climber.

The man was taken to Bellevue Hospital and charges are pending.

The tower, which was completed in 1983 at the site of the former Bonwit Teller department store, is Donald Trump's official residence.  Trump was not home at the time. Offices in the tower also serve as headquarters for the Republican party's presidential campaign.

It's not the first time a daredevil has taken to climbing a skyscraper in New York City. In 1977, George Willig scaled 2 World Trade Center, one of the 110-story Twin Towers.

As recently as 2008, the New York Times building was scaled by three different men over a few days in June 2008.