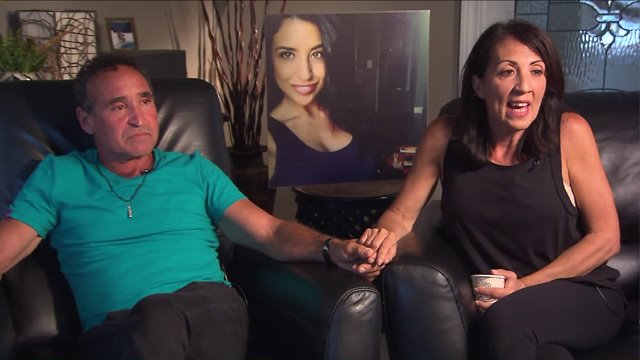 HOWARD BEACH, Queens— For the last week and a half, Phil Vetrano has kept in close contact with NYPD detectives who are working to solve the murder of his daughter, Karina.

But with no break in the case, Phil is now printing and posting reward flyers. He's also created a GoFundMe account.

Phil and his wife Cathie are hoping more than $100,000 in reward money will loosen lips in their famously close knit neighborhood of Howard Beach, Queens.

"We need some information," said the grieving father. "No questions asked."

In their first sit down interview, the Vetrano's discussed the potential they saw in their 30-year old daughter.

“There was nothing that she wasn’t capable of doing,” said Phil.

That was before someone brutally sexually assaulted and killed Karina during an evening jog in the federally protected Spring Creek marshland, just blocks from the family’s home.

This was the last thing Karina said to her father.

Twenty minutes after she had not returned home from a solo run along a path carved out of eight-foot tall weeds, Phil says he felt like something was wrong.

"I got a feeling. It came over me," said Vetrano. "She was talking to me then. And I got off that couch, and I went looking for her.”

Phil then called police and searched the weeds with detectives, who used cell phone tracking technology to ping Karina’s phone.

Phil made the gruesome discovery.

“We’re still in a state of shock,” said Cathie.

The Vetrano’s say closure is not even an option.

“so, needless to say, to think of her last moments, are indescribable,” said Phil.

Peace, at least right now, takes a backseat to anger.

“Peace? Peace to me, closure to me, is gonna come the day I see Karina," said Phil. "That’s when peace will come. Up until that point, you talk about anger and rage.”

When asked about forgiveness, Cathie simply said no.

The Vetrano’s have been leaning on a loyal network of family and friends, and say they are not concerned with conspiracy theories circulating around the circumstances of Karina’s death.

“I have not been listening to rumors. Whatever slight things that I’ve heard have been, a place that I can’t even go to," said Cathie.

They are wholly convinced those weeds have served as a hunting ground for people with bad intentions for far too long. They say Karina was the victim of a random crime of opportunity.

"You could have the happiest place in the world, and you have scum," said Phil. "That’s the problem."

"We made it through a lot of things," said Cathie. "And we’re going to make it through this.”

They want the world to know the fitness fanatic that was their friend and daughter. Karina also earned a master’s degree and graduated with honors. She had been working as a speech pathologist earlier this year.

“She was such a hard worker, such a go-getter," said her parents. "She would work three jobs.”