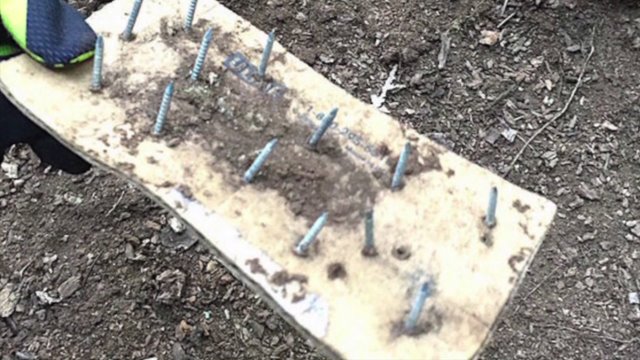 Police officials say there's a sicko out there who is setting booby traps trying to injure people in a popular Northern New Jersey park.

Wayne Police are asking everyone to look very closely at the more than 11 miles of trails in High Mountain Park Preserve because someone has been placing booby traps in the dirt path, specifically barbed wire and wooden planks with nails sticking out just beneath the surface of the trails.

"I think it's weird," Dennis Scalzitti, a hiker, told PIX11. "Why would you want to harm people out biking and hiking. We live in a very sick world, don't we?"

Wayne Police say a resident found these booby traps and told police about them starting in late June so police have now released the pictures.

Other booby traps include broken bottles behind or next to rocks and logs.

The trail supervisor can't believe anyone would be so malicious.

Those mountain biking through this 1,260 acre park that covers of Wayne, North Haledon and Franklin Lakes are being particularly careful.

"Somebody that has major issues, some mental problems would do this," Craig Sandler, mountain biker, told PIX11.

"It's bad karma, to will come back to get them," Alfredo Rodriguez, hiker, said.

Wayne Police say anyone who sees any suspicious activity should call them immediately.

The park is near William Paterson University. Police detectives are investigating.