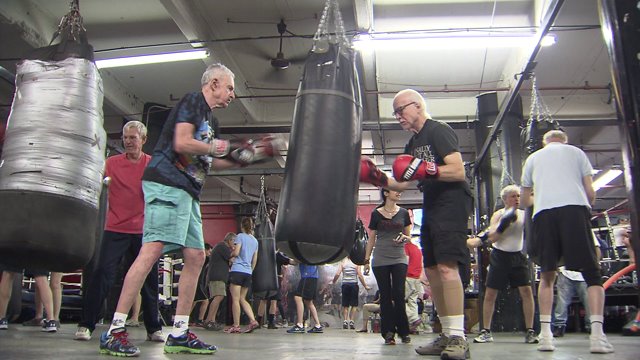 DUMBO, Brooklyn — More than 60,000 people are diagnosed with Parkinson's disease each year in the United States.

The disease affects more than 5 million people around the world.

One NYC program is giving patients living with the disease a fighting chance to live a longer life.

By day Dr. Roberta Marongiu works as a neurologist at the Weill Cornell Medical College in New York. She works to find gene therapies and a cure for Parkinson's.

By night, along with her husband Alex Montaldo, she's helping Parkinson's patients find their footing and to stand on their own two feet.

"I was looking for something that could help people in their daily basis aside from working in a lab looking for a cure," she says.

Students with all variations of the disease participate in the class, like Russ Parker, an avid runner, who at 60-year-old was just diagnosed four months ago.

"I'm really starting to hit the ground running with my exercise program," he said.

The program is called "Stop-PD" which is a non-profit, was modeled after a similar group called "Rock Steady" in Indianapolis.

"Research studies show that the high intensity type of exercises help with motor symptoms. We taylor them not just for Parkinson's patients, but we taylor them individually for each person," Marongiu said.

It's fitting that the classes are at Gleason's Gym, once the training home to the late great Muhammad Ali. The gym donates a space for the program three days a week.

Boxing to stave off Parkinson's may seem a bit unorthodox, but it's quite the opposite.

"The disease robs you of coordination. But with this class it allows you do things you couldn't do," said Ellsworth Thorndike, who was diagnosed with the disease four years ago.

"This is like I'm roaring back. It sounds silly, but it's true. It's so empowering, you have no idea," said Manny Patino, who was diagnosed last year.

For more information, head to stop-pd.org.