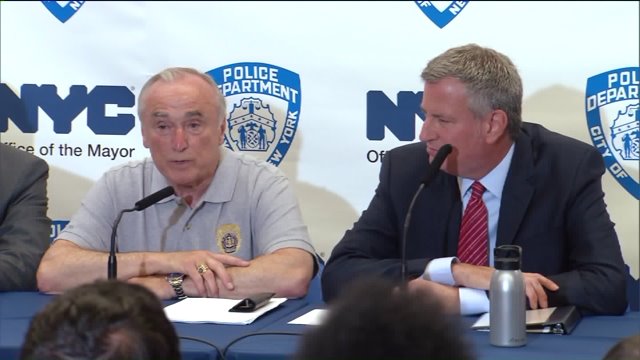 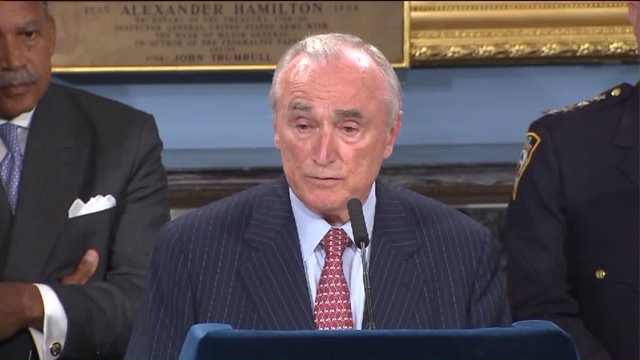 NEW YORK — NYPD Commissioner William Bratton is resigning from the department, months earlier than the 2017 date he and Mayor Bill de Blasio had been saying for at least the last two weeks.

The two confirmed at a noon news conference Tuesday that they'd known about Bratton's departure for a month, but had kept it secret until now, sparking much speculation about the conditions under which Bratton has chosen to leave.

Bratton, 68, is accepting a job as senior managing director and executive chairman of Teneo Risk. He'll remain in New York in his new position with the company, which, according to a statement it released, advises corporate CEOs on "risk identification prevention and response."

Bratton will be succeeded as commissioner by Chief of Department James O'Neill, who's been on the police force in New York City for 33 years.

Mayor Bill de Blasio said he accepted Bratton's resignation July 8, but the two men had kept it secret until Monday night, when they formally informed O'Neill about the news and directed him to determine his new management team. It will remain almost identical to the current senior management masthead.

That summary, which was detailed at a news conference at the time, was generally positive, showing a decrease in crime overall.

"The mayor, being in such a good mood at that press conference," Bratton continued, "that he then came into my office, and I informed him that I would be leaving, that I would be retiring in mid-September to pursue other opportunities. After I picked him up off the floor and brought him on my couch, we had a two-hour conversation and talked about where I was going and why, talked about transition and the need to do exactly as we’ve done here, to move it forward very quickly."

Bratton will assume his new position at Teneo next month. Current NYPD Chief of Housing Carlos Gomez will fill the vacancy created by O'Neill and become the next chief of department.

Staying on board are Benjamin Tucker as first deputy police commissioner, the second in administrative command at the NYPD, as well as John Miller. As deputy chief of intelligence and counter-terrorism, Miller will continue to hold one of the most important and relevant positions within the country's largest police department.

The top three positions, though, will be filled by a white man, O'Neill, a black man, Tucker, and a Latino man, Gomez. It's basically consistent with the need the retiring commissioner said the force faces as it goes forward.

"The issue of race," Bratton said Tuesday, "is a crisis, not just for New York, but across America. We are farther along in New York City than anywhere to meet it."

The announcement came amid growing frustration with Bratton and so-called broken windows policing, which critics deride as racist, and a protest outside City Hall that began Monday morning. About a dozen demonstrators with Millions March NYC remained there Tuesday, holding a large "Black Lives Matter" sign in front of City Hall's main gate.

Among their demands were Bratton's resignation, reparations be paid to the victims of police violence and a redirection of funds from the NYPD's budget into lower-income communities.

With an eye toward race and community issues, de Blasio told PIX11 News he'd consulted with "the people I relied on in the decision-making process here at City Hall -- one of them I happen to be married to, my wife, Chirlane."

That may not go over so well with many of the rank and file cops. The city's first lady is not popular with them. The new commissioner, O'Neill, is more so.

Bratton said as recently as last week, before his resignation announcement, that O'Neill is well-qualified to replace him. On Tuesday, de Blasio described O'Neill as "one of the best prepared incoming police commissioners this city has ever seen."

Bratton and de Blasio were asked at the news conference if federal, state and local investigations into the NYPD and City Hall that are currently underway had played roles in Bratton's departure.

"No," the mayor said emphatically. "110 percent has nothing to do with this."

"The issues about whether it’s the ongoing corruption investigation," he said, "it is ongoing, but it is being done intimately with coordination with the U.S. Attorney’s office, so that’s not a reason to leave."

In fact, minutes after Bratton's news conference finished, U.S. Attorney Preet Bharara, whose office is probing allegations of corruption at the NYPD, released a statement saying, in part, "Commissioner Bratton has been a great leader of the finest police force in the world. For his strong stewardship of the NYPD during these challenging times for law enforcement, every New Yorker owes him a debt of gratitude."

The statement went on, "Under his leadership, the relationship between the NYPD and our office is as strong as ever. He has become a personal friend to me and a great law enforcement partner to my office."

Described by the New York Times as "the most widely recognized face in American policing," Bratton began his law enforcement career in 1970 in the Boston Police Department.

He rose through the ranks and in 1980 was sworn in as BPD's superintendent of police. He went on to become, among other titles, chief of New York City Transit Police and Boston police commissioner.

He was appointed commissioner of the NYPD by then-mayor Rudy Giuliani in 1994, and remained in the position until 1996.

Mayor de Blasio asked Bratton back in 2014 to be commissioner once again. Bratton had also served as chief of the Los Angeles Police Department before returning to the NYPD as top cop.

His resignation marks the departure of one of De Blasio's most powerful defenders at a time when New Yorkers are not happy with their mayor amid the investigations, the fairly recent resignation of his press secretary and a public feud with Gov. Andrew Cuomo. In a recent Quinnipiac poll, de Blasio's disapproval rating was assessed at 51 percent.