Exclusive: Inmate with weapon streamed on Facebook Live while inside Rikers Island 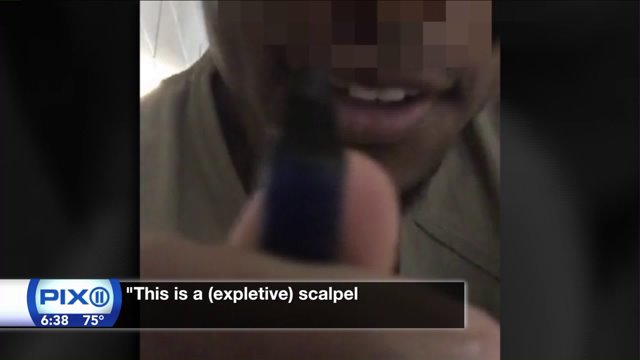 THE BRONX — A former Rikers Island inmate claims he was able to smuggle a cellphone into the jail then proceed to stream on Facebook Live from behind bars in what he said was his cell, according to a video obtained exclusively by PIX11 News that has been viewed more than 7,000 times on Facebook.

In the video, the former inmate shows off his jail cell, uniform and food. It's alarming and concerning to anyone who watches, and it's not over.

He then reaches down and unwraps what he describes to be a blade. Many inmates inside Rikers call it "the chop."

PIX11 has concealed the identity of the former inmate, who has since been released from Rikers Island and said he is speaking to us to highlight issues he has with the jail.

"The officers feel we have no say, no rights, no freedom of speech," the former inmate said.

Our conversation with him, however, happened a day after a correction officer was slashed in the face by another inmate. That guard needed five stitches, raising serious concerns about how this former inmate was able to have a blade.

The former inmate said it was meant to be some kind of joke. What is not a joke, however, are the statistics. Violence has risen inside Rikers Island, which caught the attention of U.S. Attorney Preet Bharara, who demanded serious changes be made inside Rikers.

PIX11 was granted exclusive access to the island in February. It was then that Department of Corrections Commissioner Joe Ponte touted the addition of 100 new surveillance cameras to help rid contraband from being smuggled in.

"Front gate procedures are more heightened," Ponte said. "Everything has to go through a metal detector."

Yet this former inmate said he was able to get his iPhone past security.

"I brought it straight in with me," he said. "The metal detectors ain't right, that is the only thing I can say."

PIX11 showed the Facebook video to Councilwoman Elizabeth Crowley, who chairs the committee on criminal justice and is frustrated with what she watched. Crowley said more enhanced metal detectors are available, but have been sitting idle.

"We have the technology. The types of screeners used in airports are just sitting dormant and not being used," Crowley said.

Crowley said she has given the city and the department two years to get their act together, and is now fed up.

"It is time we get a new commissioner," Crowley said.

A spokesperson for the Department of Corrections released this statement to PIX11 News regarding the case:

"Safety for staff and inmates is Commissioner Ponte’s top priority. This individual was arrested and is facing serious charges. This video is under investigation. The 43% jump in contraband finds at DOC this year demonstrates that Commissioner Ponte’s comprehensive reforms of our entrance procedures are working.

"As we have previously done, we are continuing to seek a change to state law in order to authorize the use of body scanners, which we already own. The scanners can detect the scalpels and other small blades that evade detection by other machines. With more than 50 state-of-the-art x-ray machines, metal detectors and other detection devices, we look forward to further success in stemming the flow of dangerous items into our jails."