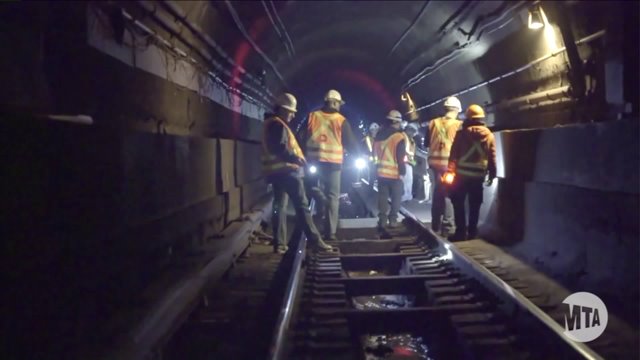 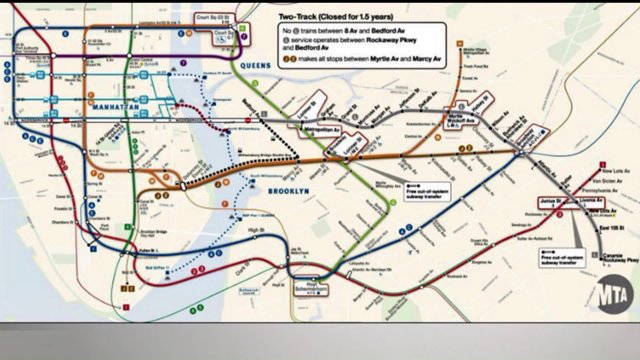 An updated subway map is pictured showing changes to the L train expected to go in effect in 2019. (MTA)

The closure will occur "no sooner than" 2019, the MTA stated in a news release. The New York Times reports it will begin that January.

The MTA opted for a full 18-month closure rather than the three-year partial closure that was previously considered after officials determined 80 percent of riders would face the same disruptions with either plan, agency officials said in the release. A shuttle train would have only been able to serve 20% of riders and it would have added more risk to the schedule.

The agency is still working with the city on plans for buses. Service on the G, J and M trains will be increased, they say.

“Throughout our extensive outreach process and review, it became clear that the 18-month closure was the best construction option and offered the least amount of pain to customers for the shortest period of time,” said MTA New York City Transit President Veronique “Ronnie” Hakim. “The 18-month option is also the most efficient way to allow MTA to do the required work. It gives us more control over the work site and allows us to offer contractor incentives to finish the work as fast as possible.”

The decision comes after the MTA held multiple community meetings where the public was asked to weigh in on the looming decision.

L Train ridership has surged in recent years, and it has become a main artery between the two boroughs, with more than 225,000 commuters from neighborhoods across Brooklyn using it to access Manhattan on weekdays and more than 50,000 people in Manhattan using it for crosstown service, according to the MTA.

The train will continue to operate between Williamsburg and Canarsie neighborhoods during the closure, but not between the Eighth Avenue stop in Manhattan and Bedford Avenue station in Brooklyn, the Times reports.

All stops in Manhattan, along with the tunnel, will close.

The closure is necessary after flooding caused by Hurricane Sandy in 2012 led to extensive damage to the line, including to its tracks, signals, switches, power cables, signal cables, communication cables, lighting, cable ducts and bench walls, according to the MTA.

During the train's rehabilitation, the MTA also plans to add new stairs and elevators to stations at Bedford and First avenues, and three new electric substations intended to provide more power to operate additional trains during rush hour.

Prior to the closure, the MTA aims to develop alternative service plans, including additional capacity on the M, J and G trains.

In addition, the agency will rebuild two “crucial” sections of the M line in Brooklyn and Queens to ensure the decades-old overpasses are safe, MTA officials said.

The project could cost between $800 million to $1 billion, with about half of the money coming from federal funds, officials said in May.