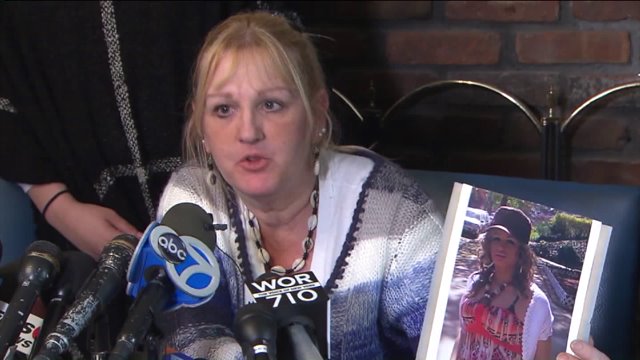 ELLENVILLE, N.Y. — The mother of Shannan Gilbert, the sex worker who was found dead on Long Island's Gilgo Beach, was found murdered in her apartment Saturday.

Mari Gilbert, 52, was found dead in an apartment in Ellenville around 2 p.m., police sources told PIX11 News. Her daughter, Sarra Gilbert, 27, was arrested and charged with murder and criminal possession of a weapon.

Sarra Gilbert is being held in jail without bail.

Sarra Elizabeth Gilbert was arrested and charged with murder and criminal possession of a weapon. (Ellenville Police Department)

Shannan Gilbert was a Craigslist sex worker who vanished in May 2010. Her body was found in December 2010 in Gilgo Beach. An independent autopsy commissioned by the Gilbert family revealed that a hole may have been frilled in the bone near her throat. Her lawyer has said autopsy findings "are consistent with homicidal strangulation."

Over the course of 20 years, 17 bodies of people associated with sex trade were found on Gilgo Beach. The remains were buried and not discovered for years.

No one has been arrested in Shannan Gilbert's case.