Why ‘heat dome’ may be worse than indicated, but we should still be grateful 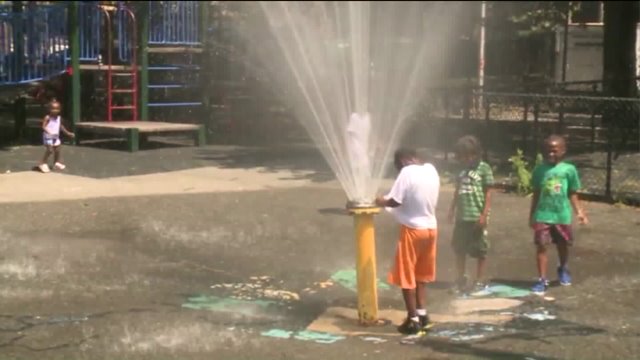 HARLEM, Manhattan — It sounds like the title of a horror movie, but a heat dome is the weather condition that much of the U.S., including the tri-state area, is under now. It's the cause for the high temperatures and humidity that's being felt all over the metro area. As bad as it seems, though, one weather expert says that it may actually be worse than it first appears. And as bad as that may be, a weather historian says that we should count our blessings nonetheless.

According to a variety of meteorological sources, including the National Weather Service, a heat dome is a large, high-pressure system in the mid- to upper atmosphere that pushes hot, humid air to the ground surface, holding it in place.

It's what people all over the tri-state are feeling now.

"Oh my God, it's humid, it's muggy, I'm drenched," said Angela Matech-Priep, in Harlem. "I look like I'm sweating like a man right now."

Tonya Brown said that the high heat and humidity feels particularly bad. "I stay in the shade," she said, as she nursed an ice cold smoothie. When asked if she'd venture into the sun, she said yes, but with a strict limit. "Just my toe," she said.

The heat dome will stay in place through the weekend and into next week. The situation is enough of a problem to have the White House issue a warning to Americans to seek air conditioning and other ways to stay cool, written by none other than a deputy homeland security advisor to President Obama, Amy Pope.

As severe as the potential effects of the heat are, a weather expert said even more precautions are in order. "The heatwave is actually being under-predicted," said Michael Schalcter, CEO of Weather 2000, a long-range weather forecasting company.

He said that because many weather computer models in the New York area rely on weather readings from weather stations in cooler locations, like Central Park, which is in a shady, breezy area, or Laguardia or JFK Airports, which are affected by cool breezes from nearby ocean lagoons, readings are cooler than actual conditions felt by most local residents. As a result, Schlacter said, most of us should expect "[actual] temperatures of 100-plus in the next few days in the I-95 corridor. "

Keeping in mind that the weather may actually be hotter than the thermometer says is important everywhere, but especially in places like Harlem, where a recent study indicated that residents may have a lower likelihood than in many other areas to have full access to resources to beat the heat. Local public radio station WNYC and some climate watchdog community groups conducted the study.

A Harlem resident who wanted to give only his first name, Harold, talked about one of the reasons for Harlem's higher heat. "The brick and everything traps the heat," he told PIX11 News.

The WNYC survey showed that Harlem has more heat-trapping brick structures and exposed asphalt than many other parts of the city, among other factors.

In Harold's case, he has air conditioning, but he says that heat builds in his home all day on days like this heat dome period. His situation is common throughout the metro area. "I come home and it's super hot," he said. "I turn on the air conditioning, but sometimes have to step out" until it cools off.

It is certainly hot right now, through the weekend and into early next week. However, looking back in time gives perspective.

"What we're feeling is nothing," said Rob Frydlewicz, a weather historian and founder of New York City Weather Archive. "On this day in 2007, it was 104 degrees. We're not going to get that bad."

He also pointed out that on Friday, the tri-state had light breezes, which helped to take the edge off the highs that were in the mid-90s.

Beyond that, "In 1953 and 1973," Frydlewicz pointed out, "we had heat waves lasting more than ten days," with even higher temperatures than are expected here in the next week.

He added that in the 1953 record-long heat wave, most New Yorkers wore full office wear to work, without the benefit of air conditioning.

So while the heat dome is leaving us plenty hot now by any measure, it's still more mild and livable than we've seen in mid-summers past.

"The hysteria is not warranted," said Frydlewicz. "Yet."

He said that his archive shows no shortage of tough heatwaves in late July and August.