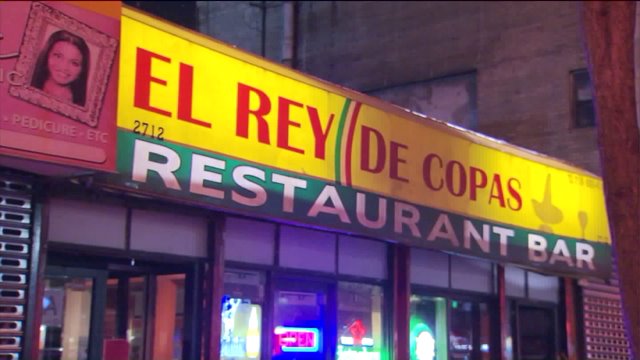 ALLERTON, Bronx – Police said a Bronx bar co-owner and father of three children is critical but stable after an intoxicated patron turned belligerent and shot him at least twice early Friday.

The El Rey De Copas Restaurant Bar is pictured on July 22, 2016, after one of its co-owners was shot by a patron. (Anthony DiLorenzo/PIX11)

It happened at El Rey De Copas Restaurant Bar on White Plains Road in the Allerton section of the Bronx.

The drunk man entered the venue packed with more a dozen customers and asked a waitress to serve him booze, police said. When she refused, the man turned aggressive, prompting the woman to call in Mario Ramirez, 52, the co-owner of the Mexican family-owned pub.

Both men got into a heated argument, which led the culprit to pulling out his gun and shooting the victim in the chest, police said. As he fell to the floor, the shooter fired his weapon again — further injuring Ramirez in the lungs and liver.

He was rushed to Jacobi Hospital where he is undergoing emergency surgery.

Officials initially said Ramirez was fighting for his life, but his brother Gustavo later said he is stable and communicating with is wife.

The brothers opened the restaurant together in 2001, Gustavo Ramirez said. Their family is from Mexico and arrived in New York City in '80s.

The gunman is familiar to the bar and called police on him two years ago, Ramirez said. In Friday's incident, the shooter, dressed in a black shirt and pants, came with a companion and scared off the other customers when he shot Mario, according to Gustavo.

Officials believe the shooter is in his 40s.

Surveillance video caught the entire shooting but it's hard to make out the gunman's face, Gustavo said.