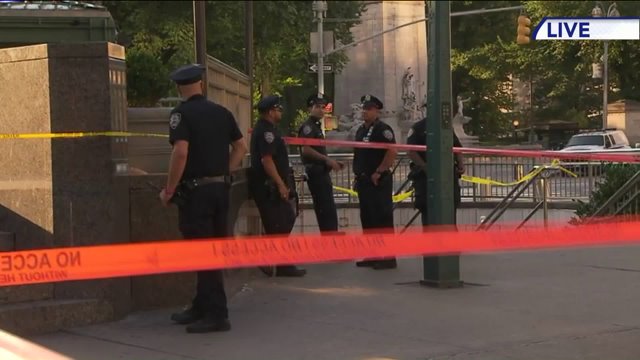 #TrafficAlert Continue delays and detours around Columbus Circle due to NYPD activity. pic.twitter.com/NMn3FhinHP

COLUMBUS CIRCLE, Manhattan — An hourslong barricade situation at Columbus Circle shows no signs of letting up before Thursday’s morning commute, and all people traveling through the area are advised to allow for extra time.

Police sources believe Hector Meneses, 52, of Queens, is the man barricaded in a car after earlier throwing a hoax device inside an NYPD patrol vehicle at Times Square.

The man was first spotted at Columbus Circle at 2:15 a.m., and around 6:30 a.m. NYPD Chief James O'Neill said negotiations were continuing.

Due to the closure, bus routes are being diverted around the area.

Trains 1, A, B, C and D are also skipping the 59th Street - Columbus Circle stop in both directions.

For the latest travel information, refer to http://www.mta.info.