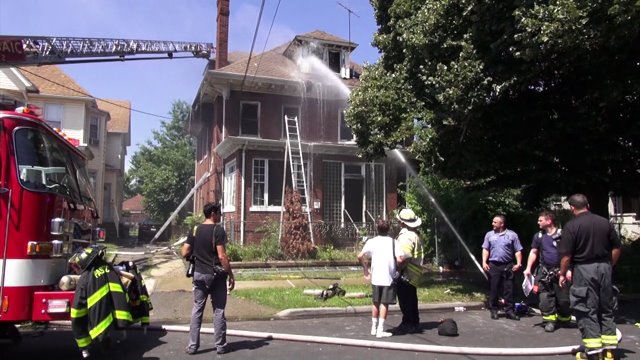 PASSAIC, N.J. — Firefighters rushed to a home on Lexington Avenue around 8:40 a.m. Wednesday where they found interior staircases collapsing and the inside already engulfed in flames.

Passaic firefighters and assisting departments were forced to back out of the building and spray the fire from the outside.

“The fire got way out of control, advanced to the third floor, which is the attic,” said Passaic Fire Chief Patrick Trentacost.

Firefighters have been called to the home before by concerned neighbors who reported people trespassing in and around the property.

“Going in and out of there all the time, sitting on the back side, smoking on top of the roof,” said Pauline Henry, who was forced to evacuate her home in her pajamas this morning. “I was about to get ready to go to work. I had to call the job and say I can’t make it because there is a fire next door.”

The property is bank-owned and abandoned. It was boarded up before Wednesday.

“Certainly suspicious at this time. The electric has been shut to this building for some time,” said Chief Trentacost. “And certainly there is evidence that shows that there were people in and out of the back of this house and building. And I’m leaving that up to the investigators to figure out who, why and when.”

Smoke continued to billow out of the third floor Wednesday afternoon. Firefighters were forced to battle the flames inside for hours, along with the high temperatures outside. Several firefighters were being monitored for heat exhaustion, but no one was reported to have been seriously hurt in the blaze.