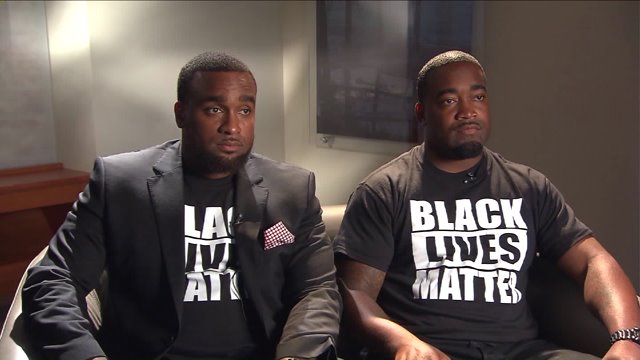 NEW YORK — Cory Hughes never imagined the Black Lives Matter demonstration he organized in Dallas on July 7 would end in the deaths of five police officers. Or that his brother, Mark, would be mistakenly identified by police as a suspect in those shootings.

Mark Hughes told PIX11 News that he wanted to make a political statement at the rally, so he attended armed with an AR-15 rifle, which he said he was carrying legally. It would prove to be a fateful decision.

At one point in the evening, the peace turned to panic, as the sniper, later killed by a bomb-carrying robot, took aim at police: “We heard the gunshots before a lot of people did,” Cory Hughes recalled.

Mark said once he realized there was an active shooter, he turned over his AR-15 to a Dallas police officer, and then volunteered to direct traffic and get people to safety.

But after he checked social media, Mark says, “once I saw the picture that was blasted on the television screen I began to fear for my life.”

Dallas Police sent out a tweet of Mark smiling with his gun, which read, “this is one of our suspects. Please help us find him!”

“I couldn’t understand how I went from a peaceful protester, to a person that’s assisting to now I’m the most wanted man  in America, it didn’t make sense to me,” Mark said.

The Hughes brothers say through the chaos on the ground they sought out police to try and clear Mark’s name. Instead they were both interrogated for hours, and when finally let go, Mark’s photo remained on the Dallas PD Twitter page for nearly 12 more hours.

“We’re asking them simply to go out and clear my name because my image is the last image the public sees,” Mark told PIX11.

It’s unclear when or if the Dallas Police Department might publicly clear Hughes’ name.