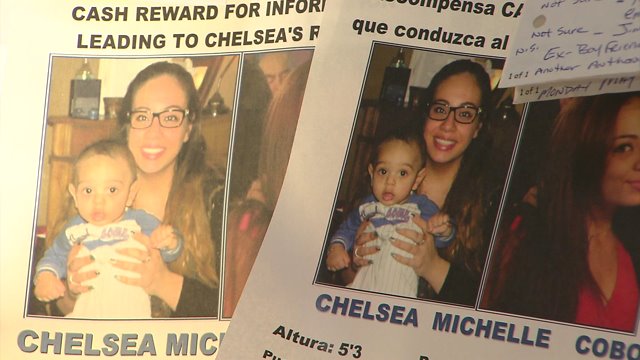 BOROUGH PARK, Brooklyn -- Chelsea Cobo’s baby son was gleefully playing “clap hands” and holding up one finger, as he celebrated his first birthday this week at home in Borough Park, Brooklyn.

Baby Christopher grabbed the string on a birthday balloon and rocked back and forth.

But his 22-year-old mother was nowhere to be found.

Chelsea Cobo hasn’t been home since May 6.

Cobo noted that Chelsea was “so happy to be a mom” and photographed Christopher every day.

But not long after Chelsea’s biological mother died of kidney failure in March, Chelsea started suffering from depression.

The young mom checked in to the psychiatric ward at Coney Island Hospital.

She spent two weeks there and became friendly with a female roommate.

The roommate had a frequent, male visitor named Justice.

Not long after, Chelsea—a one-time homebody—started going out with the hospital roommate and Justice.

After one outing, Chelsea came home in the early hours of Tuesday, April 26.

“She was out of it! She was unresponsive,” Rose Cobo recalled, saying she took Chelsea to the hospital.

She noticed bruises on Chelsea’s arm and thought the young woman might have been raped. A drug test was also performed.

“That was the first time in her life she had an opiate (in her system), Cobo said. “She was drugged, robbed, and raped that night.”

Chelsea Cobo said she didn’t’ remember who she was with that night or what had happened.

Rose dropped Chelsea off at Lutheran Medical Center in Brooklyn. A van was supposed to take Chelsea to St. John’s Riverside in Yonkers.

It took hours to get to Yonkers and, during that time, Chelsea Cobo was apparently texting her friends and asking them to pick her up in Yonkers.

“I’m only doing this so I can get Methadone,” said one Facebook message attributed to Chelsea.

At one point, her female friend from Coney Island hospital had written, “Listen, my boy got dope. Let’s pick you up. We got everything.”

Rose Cobo said Chelsea’s friend, Justice, claimed he picked Chelsea up in Yonkers on May 6 and brought her back to Brooklyn, dropping her off on 68th Street in Sunset Park.

Some people reported seeing Chelsea leaving the Floridita restaurant on Fifth Avenue in Sunset Park with a man named Antonio. Antonio and Justice are friends.

Crowley spoke to PIX11 by phone and said he’s concerned about Chelsea’s possible descent into drug use.

“Once someone gets hooked on something like that, they don’t really have control over what they do,” Crowley said. “We’re looking at every aspect, from prostitution to just being held against her will.”

Crowley said he spoke to people in Coney Island, who said they spotted Chelsea Cobo there in the last, two weeks—around the areas of West 16th Street, West 5th Street, Mermaid Avenue and Surf Avenue.

“We had spoken to a prostitute who works down in that area, who had identified her from a photo we had shown her.”

“All the information I received was of her being a very caring mother, a very loving mother to her son,” Crowley said. “And we believe, to some degree, if she’s on these opiates, then she’s being controlled by others.”

“We truly need the viewers, your viewers, to track her down.”

The NYPD Crime Stoppers unit reached out to Rose Cobo on Wednesday. Anyone with information about the case can contact Crime Stoppers at 1-800-577-TIPS.

While watching a music video, showing photos of Chelsea with a newborn Christopher, Rose Cobo sobbed, “Something’s wrong. Where is my girl?”