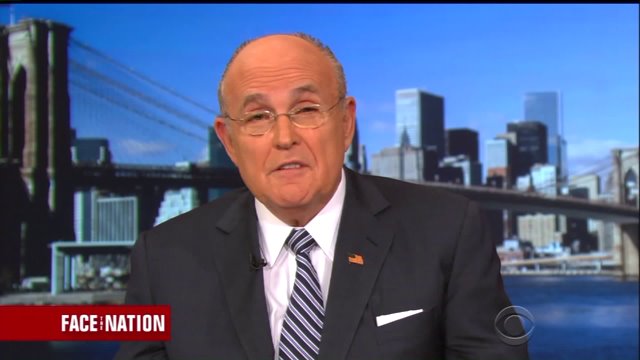 Giuliani spoke of a difference between white and black communities, and said there is "too much violence" in the black community in comparison with the white community.

He also cited unfounded statistics and said black men are "99 percent" more likely to be killed by a black civilian than by a cop before going on to say that the Black Lives Matter movement is "inherently racist."

"A black will die one percent or less at the hands of the police and 99 percent at the hands of a civilian, most often another black," Giuliani said. "So if you want to protect black lives, then you gotta protect black lives not just against police, which happens rarely, although with tremendous attention, and which happens every 14 hours in Chicago. Every 14 hours, and we never hear from Black Lives Matter."

He then said that the black community should focus on teaching their children about how to act toward police.

"If I were a black father, and I was concerned about the safety of my child, really concerned about it, and not in a politically activist sense, I would say, be very respectful to police, most of them are good, some can be very bad, and just be very careful. I also say, be very careful of those kids in the neighborhood and don't get involved with them, because son, there's a 99 percent chance they're going to kill you, not the police."

He ended the interview by saying the Black Lives Matter movement, an activist group that advocates for racially tolerant behavior and victims of police violence, is "inherently racist" due to their focus on police-involved murder.

Giuliani also said that the movement and the publicity around it creates a "disproportion" which threatens the police.

"The police understand it, and it puts a target on their back," he said. "Every cop in America will tell you that if you ask them."