‘Floating pool’ in East River closer to becoming a reality 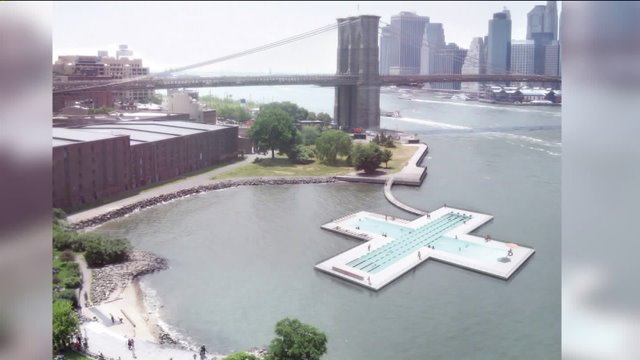 UPPER EAST SIDE, Manhattan — On a scorching hot day, like those the tri-state is experiencing in this current heatwave, the idea of being able to plunge into the cool waters that surround all five boroughs and many of its suburbs seems like a dream. It's an unsanitary dream, but a dream nonetheless. Now, though, the dream is a lot closer to reality, thanks to generous Kickstarter donors and the vision and innovation of four designers.

They conceived of and created a river filtration system which would be the key element of a swimming pool that would sit in the river, filled with cleaned, cool river water.

Called the Plus Pool, because of its plus-sign shape, the project is inching closer to completion. In the meantime, though, its creators have also begun a program, in conjunction with the city, to develop future Plus Pool users.

"I will swim in the river," one nine year-old swimming student said, reading the slogan emblazoned on the swim bag she'd been given as part of the Plus Pool learn-to-swim program.

It asked the New York City public housing agency, NYCHA, to help select elementary school age residents who want to become swimmers. The intent is for those children to eventually swim -- and maybe even become instructors -- in the Plus Pool.

Its design was born in the summer heat three years ago.

"It was probably a day just like today," said Plus Pool operations director Oana Stanescu, "when you're just... close to the water, you're like, 'Why can we just not be in there?"

Stanescu is an architect who conceived of the pool along with fellow architect Dong-Ping Wong and graphic and art designers Jeff Franklin and Archie Lee Coates.

They determined that a plus sign-shaped pool would allow for up to four separate pool spaces -- for lap swimming, recreational swimming, wading and instructional swimming -- all while the pool cleaned out the impurities of the river surrounding it.

It's by no means the first time that pools have been set up in the East River. Under the Bloomberg Administration, a floating pool hosted hundreds of people daily for two summers. However, it was on a self-contained barge, operating completely independently of the river on which it floated.

In the 1800s, however, the city had up to 18 so-called public baths in the river. The river's water flowed through each large public bath pool, which were anchored in place at various locations, and had attached decks and changing rooms.

The increased pollution of the area's waterways forced the closure of the river's public baths in the early 1900s, but a triple-filtration system developed by Plus's designers eliminates most of the river's current impurities, which includes 24 million gallons per year of storm water runoff and something else that is allowed to drain into he city's waterways.

Hint: that something else is the first four letters of "pool."

"We were able to achieve a really perfect clean water," said Stanescu in an interview with PIX11 News, "where the entire bacteria was filtered out."

After performing thousands of tests, the designers have been able to certify that their system cleans river water to a standard that's higher than any city pool. It meets the standards of the federal, city and state governments.

However, getting operating clearance from any of those entities, even though Plus Pool's designers have formed partnerships with them, may take two to four years.

The planners have raised nearly $400,000 through their Kickstarter campaign and sale of commemorative pool tiles, but they need to raise many times more than that to build the project.

In the meantime, they've launched the Plus Pool swimming education summer program, free of charge.

"I'm having so much fun!" exclaimed nine year-old student Alonzo Munden. "It's a blast!"

His fellow swimmer Andrea Santiago expressed similar excitement, but with a more serious eye toward the potential of the project in which she's participating.

"I want to swim in the river," she told PIX11 News, "because it will clean the river while we're swimming."