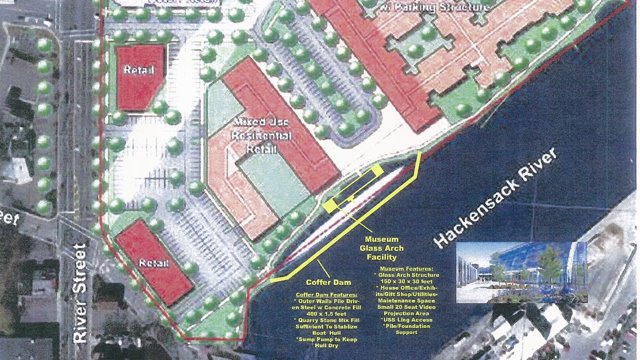 NEW JERSEY -- A World War II memorial that has been on the Hackensack River since 1972 is now in jeopardy of losing space for part of the exhibit.

The U.S.S. Ling, which is moored on the river for public tours and education, has a space for artifacts alongside it. It honors the 3,500 vets who died on the 52 subs that were lost during World War II.

The land it’s on is owned by the North Jersey Media Group. For many years the company leased the land to the submarine association for very little money.

Now, however, the land is being sold to a private developer who intends to turn the land into retail space, residential units, and a hotel. It is leading to the eviction of the New Jersey Naval Museum.

The vets have come up with an artist’s rendering of a potential new museum right next to the submarine part of the memorial.

“We should have a piece of land where we could put our museum, maintain the submarine, and continue to have tours,” a World War II submarine veteran said.

It is a large glass museum that according to Gil de Laat, Submarine Association President, would fit very well into the architecture of redevelopment plan.

Right now the sub and many of the artifacts are under the jurisdiction of the U.S. Navy, and the city has offered a temporary place to store the artifacts until they can find a new location.

The big problem is the fact that there does not seem to be enough funding to undertake such a project.

According to Hackensack’s city manager David Troast the city is doing what it can. However, he says that building a new memorial and museum needs to be a joint federal, state, county and city project.

“To have a permanent location takes a lot of planning and money, of which there is no planning and the city in the fiscal year does not have any money.

A solution has yet to be found. After 44 years of the Ling being moored on the river, the veterans say that some way must be found in order to preserve it.