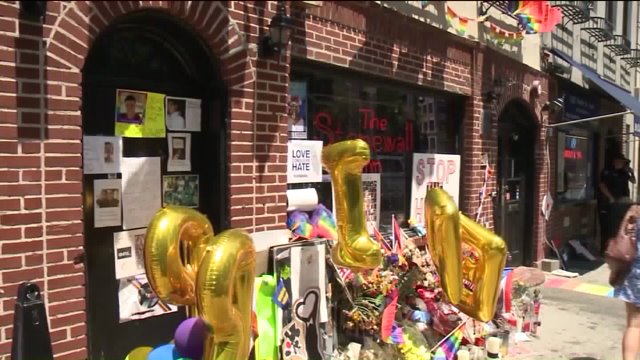 GREENWICH VILLAGE, Manhattan — Hundreds packed the streets outside the Stonewall Inn Monday as the U.S. Secretary of the Interior, Stacey Jewell, officially named the area a national monument.

"We want our history to be known and to reflect who we are," Jewell declared.  " A nation that inspires us to be as inclusive as it is diverse."

The monument will cover the Stonewall Inn, nearby Christopher Park, and the streets and sidewalks that so many marched on in 1969, the birthplace of a movement.

Edie Windsor, the plaintiff in the Supreme Court case to overturn DOMA, the Defense of Marriage Act, was in attendance.

"I am thrilled, just thrilled," declared Windsor, a pioneer in the LGBT community.

On Friday, PIX11 introduced you to Beth Suskin and Leslie Cohen, a lesbian couple who have been madly in love for the past 40 years.

They sat side by side Monday at the very park a statue they posed for forty years ago now sits, and will forever be part of a National Monument.

"We must educate the world," said Suskin on why she posed for the statue 40 years ago.  "The world has to see what two women in love look like."

Leslie Cohen opened a bar called Sahara in the 1970s, the first of its kind to welcome openly gay women. It was a place to come and be yourself.

She says the most important thing to do moving forward is to stay visible.