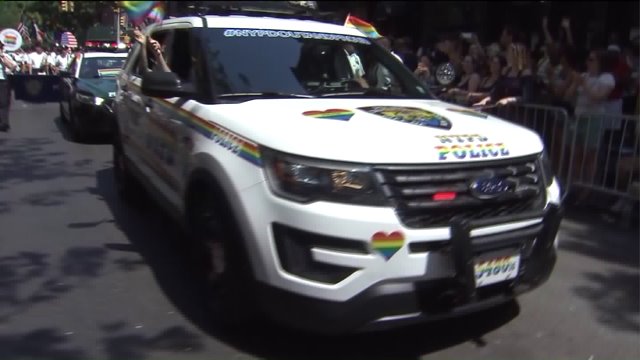 GREENWICH VILLAGE, Manhattan —NYPD officers filled the streets of the New York City Pride Parade march, whether it be in the ceremonial band, the rainbow NYPD vehicle or the counter-terrorism units on standby.

"The NYPD will protect you," Mayor Bill de Blasio said at the start of the march. "It will be the biggest and safest Pride parade we have ever had."

There were twice as many police officers assigned to this year's march compared to last year because of Orlando.

On every corner of the two mile march, steel barricades were in place and officers directing spectators and marchers where they can and can't go.

There also seemed to be a larger presence of the NYPD Gay Officers Action League and their parents and partners. There were many other gay law enforcement groups marching as well.

Two women were front and center on the lead float. They are the lesbian couple who posed for the Christopher Park statue near the Stonewall Inn 37 years ago.

That statue is now part of a national landmark that will be dedicated on June 27.

"We came because Orlando happened and this is the time when you're supposed to show you're not afraid," Leslie Cohen told PIX11.

Her wife, Beth Suskin added, "I saw a lot of policemen and a lot of love."

"I felt completely safe," Kevin Hertzog, co-founder of Gays Against Guns, told PIX11. "I don't think police would allow anything to happen on this day."

During the six hours of the March, police said there were no arrests.

There is a documentary being made about the couple who posed for the statue in Christopher Park.

To find out more about the project, visit storiesofsahara.com.