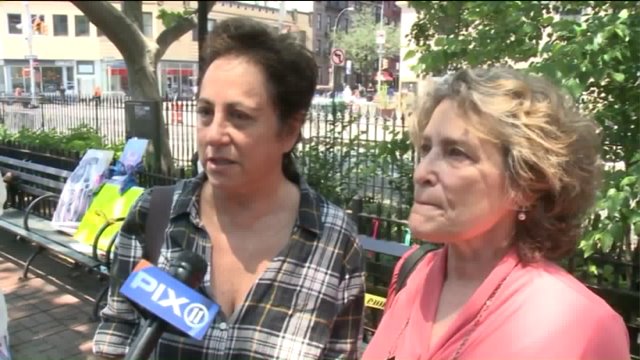 GREENWICH VILLAGE, Manhattan — It was a historic day for the country, for New York and for the LGBT community, as President Obama declared Stonewall Inn and Christopher Park a national monument.

It is the first time in nation's history that an LGBT establishment received national monument status.

For Leslie Cohen and Beth Suskin, not only was this historic, it was extremely personal. The two have been in a loving relationship for nearly 40 years.

"This is the love of my life, my soulmate," Suskin said as she smiled to ear looking at her partner Cohen.

Besides their love, the two share something else — the main sculpture that sits in the middle of Christopher Park. It is an image of two women, casually sitting on a bench. The two posed for it back in 1979. The statues were completed in 1980, but did not have a permanent home until 1992 when they were placed inside Christopher Park.

Today, just minutes after the President announced the National Park Status, Leslie and Beth exited the subway to simply visit the park ahead of Pride weekend without any knowledge of the major announcement.

"We were walking through and we saw National Park Rangers and we saw them holding the signs," Cohen described. " I said are you kidding me, and they told us it just happened."

The president's announcement was even more significant because of the timing — coming just hours before pride festivities and Sundays march where millions are expecting.

Parade Organizers from PRIDE NYC said the week will be "epic."

"This helps us bridge the gap of what is happening in Orlando and a reason to come out and be proud and be happy," Co-Chair David Studinsky said. " It is an important moment for all of us and we are so happy its happening on pride weekend. "